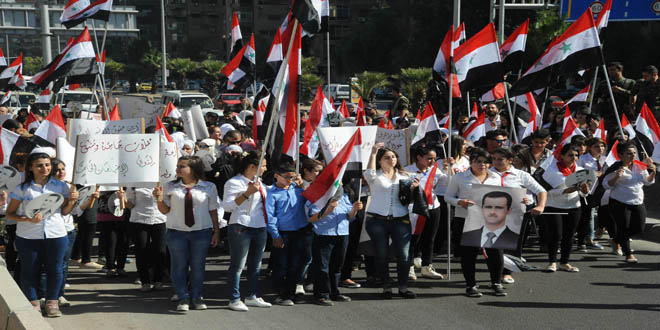 Damascus, SANA- A sit-in was staged in front of the building of the United Nations (UN) in Damascus protesting and condemning the terrorist war waged on Syria and the terrorists’ supporters.

Students from Damascus University, the Institute of Special Education for Blind, members of local associations concerned with blind people and a number of volunteers participated in the set-in.

The Syrian flag was raised at the event and slogans were chanted condemning terrorism and its supporters and expressing support for the Syrian Arab Army in its battles against the terrorist organizations.

The participants said that the sit-in aims at demanding an end to the terrorist war on Syria and drawing attention to the increase in the number of civilians affected by this war that is still raging for more than five years.

They also called for implementing the UN Charter’s principles on human rights and affirmed the sovereignty of Syria.