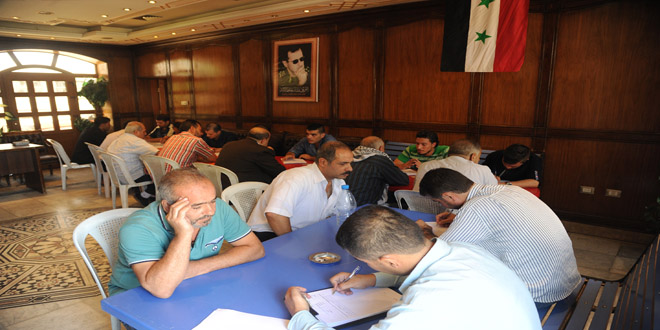 Damascus, SANA –Nearly 250 persons have had their legal status settled on Thursday in the framework of fulfilling the implementation of the third phase of al-Qadam neighborhood reconciliation.

In a press statement from al-Qadam area, Damascus Countryside Governor Alaa Munir Ibrahim said that the persons who had their legal status settled will return to their normal lives, adding that the upcoming days will witness the settlement of the legal status of many persons in al-Qadam area as well as Qudsaya, al-Hameh, Wadi Barada and al-Tal areas, particularly after issuing the amnesty decree no.15 which offers the opportunity to those who want to be normal citizens again.

The Governor pointed out that the local reconciliations which took place in Darayya city and al-Moadamyiah town have been reflected positively in the other areas, calling on the armed persons to lay down their arms.