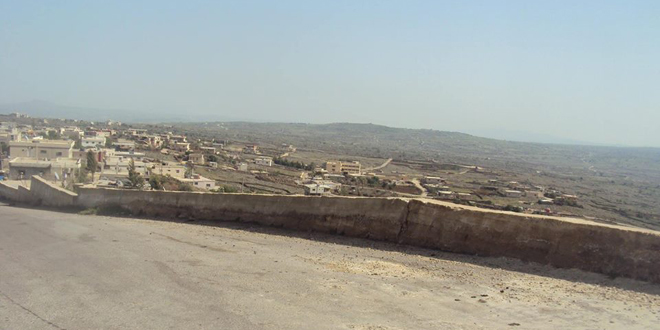 Quneitra, SANA- As part of the Israeli enemy’s support for the terrorist organizations which have been waging a violent attack in the area of al-Amal Farms in Quneitra countryside, an Israeli aircraft targeted a position in Tal al-Shaar area on Saturday.

A military source told SANA that Army and Armed Forces units, in cooperation with popular defense groups, thwarted a massive attack carried out by terrorist groups affiliated to Jabhat al-Nusra on a number of military points and positions in the direction of Hadar-Mashati Hadar -Tal Ahmar in Quneitra countryside.

The source added that the clashes between the army and the terrorists are still ongoing, noting that army units and the popular defense groups inflicted heavy losses in personnel and munitions upon terrorists.

Earlier on Saturday afternoon, SANA reporter said that an Israeli drone fired a rocket on a position in Tal al-Shaar area to the east of Juba village in Quneitra countryside, causing material damage.

The reporter had said that army units in cooperation with popular defense groups clashed with terrorists, most of whom from Jabhat al-Nusra, who attacked military posts in al-Amal farms and al-Hamriyeh areas to the south of Hadar town in the northern countryside of Quneitra, and that the attack was foiled after inflicting heavy losses in munitions and killing a number of terrorists including 9 leaders.

Ahmad Hossni and Mohammad al-Nueimi were identified among the dead terrorist leaders.

The aforementioned terrorist attack coincided with firing tens of artillery shells on locals’ houses in Harfa village in the northern countryside of Quneitra, causing material damage to properties.

Later on the day, SANA reporter said the artillery of the Syrian army targeted terrorists’ vehicles moving on the axis of Jabata al-Khashab-al-Hamidiyeh-Quneitra crossing, destroying many of them and leaving a number of terrorists dead or injured.