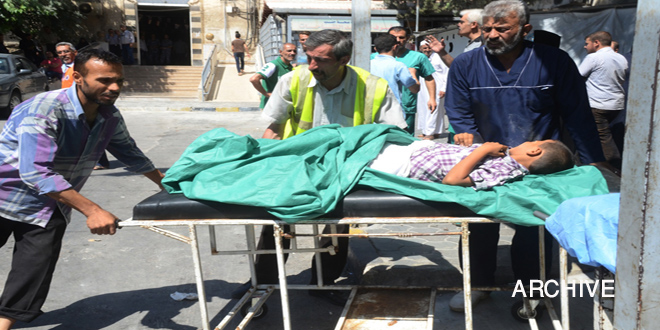 Aleppo, SANA-14 civilians were killed and 44 others were injured in terrorist attacks with rocket shells and explosive bullets on residential neighborhoods in Aleppo.

A source at Aleppo police command told SANA reporter that 13 civilians were killed and 25 others were injured when rocket shells, fired by terrorist groups, fell on al-Hamadaniyeh neighborhood in Aleppo city.

Earlier on Wednesday, terrorists fired a rocket shell which fell on a house in al-Hamadaniyeh neighborhood injuring five civilians from the same family; some of them were in critical conditions.

A number of rocket shells, fired by terrorist groups, also fell in al-A’aZamiyeh neighborhood, killing a civilian, injuring 12 others and causing material damage to public and private properties.

Two civilians were also injured due to terrorist attacks with explosive bullets on Salah al-Din  neighborhood.

Two rocket shells were fired on Wednesday by terrorist organizations on al-Baath City in the southern province of Quneitra.

SANA reporter in Quneitra said that terrorists located in al-Hamidiah village fired two rocket shells that fell on the area surrounding the Communications and Culture Directorates in al-Baath City, causing material damage to one of the citizens’ houses and in public properties.