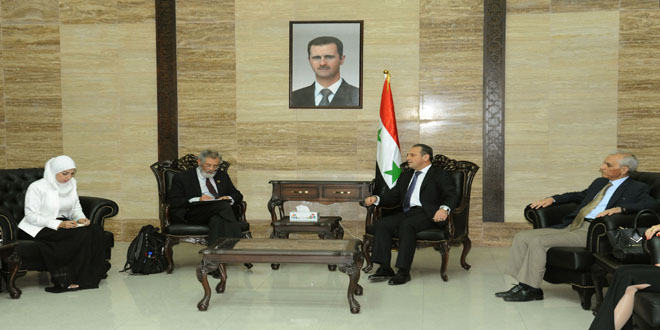 Damascus, SANA- Head of the US Peace Council delegation which is currently visiting Syria Henry Lowendorf affirmed on Monday the importance of lifting the economic sanctions imposed on the Syrian people, especially in the health sector, which have negatively impacted the lives of the Syrians, considering that “these sanctions are immoral”.

During a meeting with Health Minister Dr. Nizar Yazigi, Lowendorf pointed out that the delegation seeks to provide medicines, mainly for cancer patients to alleviate the suffering of the Syrians due to the unfair blockade which is imposed on them.

In turn, Dr. Yazigi said that the coercive, unilateral and unfair procedures imposed on the Syrian people have left a negative impact on the health sector, pointing to the damage sustained by the health sector as a result of being targeted by the armed terrorist organizations, especially hospitals, health centers and the ambulance system.

The minister affirmed that the ministry is working on enhancing cooperation with all organizations and local associations to deliver health care services for affected people through health centers, medical and mobile clinics, particularly in the affected areas where health centers are out of service.

In a relevant context, Minister of State for National Reconciliation Affairs Ali Haidar met the US delegation.

During the meeting, Haidar stressed the importance of local reconciliations along with the fight against terrorism to maintain Syrian sovereignty, noting that reconciliations formed a gate that allowed the return of many of the militants who turned themselves in and had their legal status settled after they have been used as tools in the project of spreading chaos at the beginning of the crisis in Syria.

The minister pointed out that the main obstacle facing the reconciliation project is the will of Western countries who are seeking to derail peace efforts exerted by the Syrian government, adding that the international community is using the humanitarian issue at international forums for its own advantage while it provides less than 20% of the humanitarian assistance.

In a press statement following the meeting, the members of the delegation expressed the importance of this visit to have a close look at the situation in Syria.
In turn, head of the delegation hailed the exerted efforts to accomplish the local reconciliations and the efforts of the Syrian government to bring the Syrians together, adding that the delegation members came to the conclusion that what is happening in Syria is an aggression waged on it. 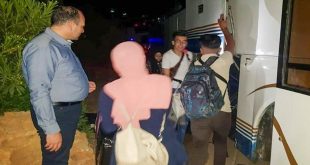