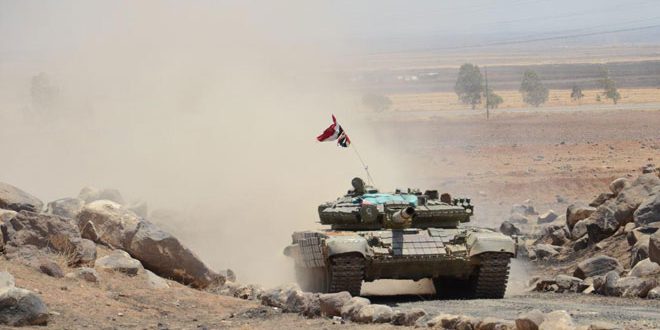 Aleppo, SANA- The army established full control over al-Mallah northern farm, part of al-Mallah southern farms, and two blocks of buildings near al-Lairamoun area in the northern countryside of Aleppo province after targeting the terrorist organizations’ dens and gatherings, a military source told SANA on Monday.

The source confirmed that the army’s operations resulted in killing a number of terrorists from the so-called “Nour Eddin Ezzenki Movement” and destroying their arms and equipment.

Army units confronted attacks of terrorist organizations in Aleppo and established control over al-Mahalij, Sarhil, the Police Building and a number of compounds in al-Layramon area after inflicting heavy losses on terroristsز

Army units thwarted a terrorist attack launched by ISIS members on al-Mabouja village in the northeast countryside of Salamiya, killing and injuring many of them.

An army unit destroyed a vehicle and a mortar base for ISIS terrorist organization in Abu Hanaya village west of Salamiya city.

Meanwhile, an army unit, in cooperation with popular defense groups, killed a number of al-Nusra terrorists, injured many others and destroyed one of their heavy-equipped vehicles on the axis of Taldara- al-Ramlyia in the western countryside of Salamiya