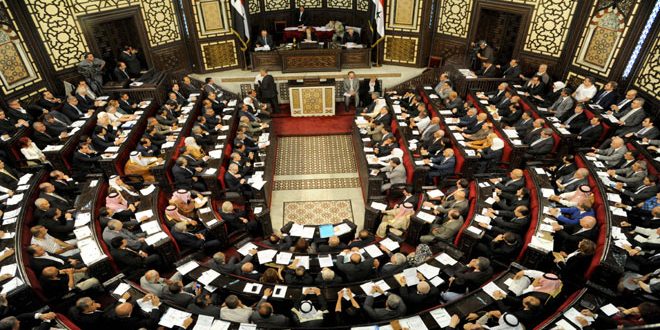 Damascus, SANA-People’s Assembly held on Sunday its second session for the first ordinary round of the second legislative term, headed by its Speaker Hadiyeh Khalaf Abbas.

Members of the People’s Assembly stressed the necessity of issuing calculated decisions about amending the prices of oil derivatives and studying their impacts on the living conditions of citizens, calling for dealing transparently with citizens and explaining the reasons and causes behind any issued decisions.

The members also pointed out to the need to adopt measures that will contribute to launching the production process to avoid inflation, underlining the need to take a firm line against manipulators.

The MPs criticized recent decisions of the Internal Trade and Consumer Protection Ministry, calling on the government to support the agricultural and industrial production and adopt measures and procedures that take into account the income of citizens and rein in the rise in prices.

They also stressed on the need to enhance the steadfastness of the members of the Syrian army and their families.

At the end of the session, Speaker Abbas said that she invited the economic team in the government to attend tomorrow’s session to discuss the government’s decisions related to the concerns of citizens and their needs.

On June 6, the People’s Assembly held its first session for first ordinary round of the second legislative term in which Hadiyeh Khalaf Abbas was elected as the Speaker of the People’s Assembly uncontested and Najdat Ismail Anzour as the Deputy Speaker. Khaled al-Abboud and Rami al-Saleh were elected as Secretaries, and Maher Qawarma and Atef al-Zeibaq as observers.