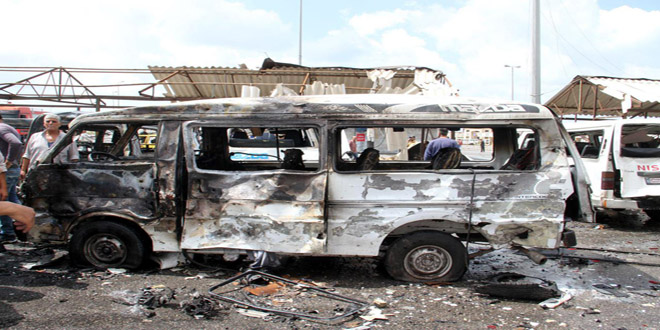 Tartous/Lattakia, SANA – At least 78 people were killed and scores, were injured, some critically, in a series of terrorist bombings that rocked the coastal cities of Tartous  and Jableh on Monday morning.

A source at Lattakia Police Command said that 45 people were killed and others, mostly women and children, were injured, in the terrorist attacks hit Jableh city.

SANA correspondent in Lattakia said that twin terrorist bombings targeted the main entrance of the bus station in Jableh city and another terrorist bombing happened near Jableh Electricity Directorate on the outskirts of al-Amara residential neighborhood.

A fourth bombing happened as a suicide bomber blew himself up at the entrance of emergency department at Jableh National Hospital.

In Tartous, SANA reporter said that three terrorist bombings rocked the province this morning leaving more than 33 people killed and 47 others injured.

The reporter added that a car bomb exploded at the bus station gate, while a suicide bomber blew himself up inside the station.

According to the reporter, another terrorist blew himself up in the residential suburb located in front of the bus station to the west of the city.

Hundreds of Lattakia residents and students from Tishreen University rushed to the blood transfusion center to donate blood for the victims of the terrorist bombings that took place in Jableh.

Later in the day, Interior Minister Maj. Gen. Mohammad al-Shaar inspected the sites of the terrorist bombings which took place in Jableh city and which claimed the lives of a number of civilians, most of them women, children, and school students.

Al-Shaar, who was accompanied by the governor of Lattakia Ibrahim Khudr al-Salem and the Secretary of al-Baath Arab Socialist Party branch in Lattakia Mohammad Shuraiteh, said in a statement to reporters that those who committed the bombings and the terrorist acts seek to target the unity of the Syrian people and their steadfastness.

He said that those responsible for such acts will have to face reprisal, and such attacks will not prevent Syrians from combating all forms of terrorism in all its components, adding that these crimes should drive Syrians to more cohesion, unity, and coordination to uproot terrorism.

He said that targeting the National Hospital and the bus station in Jableh city reveals once again the criminal nature of the mercenaries who target all aspects of life and infrastructure in Syria, whether in hospitals or elsewhere, and the same applies for Tartous where a bus station was targeted.

Al-Shaar said that the Ministry and concerned authorities and parties formed an investigative committee to uncover the circumstances of the attacks and discuss measures to enhance internal security to prevent a recurrence of such bombings, in addition to taking all the necessary measures to help the wounded and the families of the martyrs.

In turn, Lattakia governor said that the bombings resulted in killing scores of civilians, injuring about 150 others, and causing huge material damage, noting that the death toll could rise due to the seriousness of the injuries.

Later, the Minister, accompanied by Tartous Governor Safwan Abu sa’adi, inspected the sites of terrorist explosions in Tartous, saying “Terrorism has no title which aims at sabotaging and targeting Syria’s unity.”