16 civilians killed, 68 wounded in terrorist attacks on Aleppo neighborhoods and a hospital 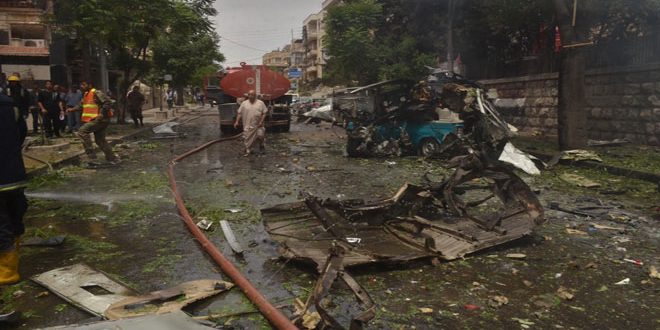 Aleppo, SANA- 16 civilians were killed on Tuesday and 68 were injured according to the most recent toll due to terrorist attacks with rocket shells on residential neighborhoods and a hospital in Aleppo City, SANA’s correspondent reported. The source indicated that the terrorist attacks caused a huge material damage to the houses and proprieties of the civilians and to the infrastructure in the targeted neighborhoods.

A source at Aleppo Health Directorate said that most of the wounded civilians are children and women and their injuries are severe as the number of the killed civilians might increase. Later, SANA’s correspondent in Aleppo reported that 3 women were killed, 17 other women and children were wounded, and extensive material damage was caused by terrorist organizations’ attacks on al-Dhabeet Hospital in al-Mouhafaza neighborhood, and a few hours after that the correspondent stated that the death toll rose to 16 and the number of injured people rose to 68.

Meanwhile, three civilians were injured in a terrorist rocket attack on al-Zahra’a town in the northern countryside of Aleppo.

Local sources from the town told SANA’s correspondent that terrorists fired several rocket shells on residential areas, injuring 3 people, one of them a woman, and causing material damage to citizens’ homes and properties.