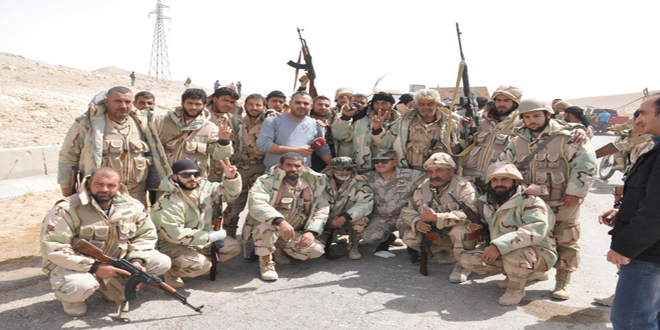 Provinces, SANA- Military operations across the country continued on Thursday, with the army units, in cooperation with the popular resistance, targeting terrorist organizations’ positions and dens and repelling their attack attempts in various areas, leaving many of their members dead and wounded.

The popular resistance in the eastern area killed 30 ISIS terrorists in separate areas in Deir Ezzor and its countryside.

Local sources in al-Mayadeen city told SANA that members of the popular resistance, backed by the locals of the city and the villages of Saalou, al-Shaheil in the southeastern countryside of Deir Ezzor, clashed with ISIS terrorists, killing 10 of them.

Other Five terrorists of the so called ” al-Hesba” were killed in an ambush carried out by the popular resistance in al-Ghabra village , 130 km east of Deir Ezzor city.

In a special operation of the popular resistance in al-Bukamal city, Four ISIS terrorists also were killed.

In Deir Ezzor city, at least 11 ISIS terrorists were killed in al-Sina’a neighborhood and the train rail, according to the local sources.

Heavy losses were inflicted upon ISIS terrorists in personnel and weaponry , the source added.

Army units, in cooperation with the popular defense groups, thwarted an attack by ISIS terrorists on a number of military posts in al-Sheikh Hilal village in al-Salamiyeh area in Hama eastern countryside, destroying 3 vehicles equipped with heavy machineguns.

In the same context, a source on the ground told SANA that army units and the popular defense groups fired intensively on sites and gatherings of ISIS terrorists in al-Rahjan, Um al-Mayal and Abu Hanaya villages in the eastern part of al-Salamiyeh during the last 24 hours.

A command center and a weapons and ammunition depot were destroyed in the operations, which also left a number of terrorists dead.

Yesterday night, army units clashed with ISIS terrorists who attacked military checkpoints in the area surrounding Wadi al-Azib in the eastern countryside of al-Salamiyeh, killing at least 10 terrorists and destroying one of their vehicles before the other terrorists fled.

In the meantime, army units firmly established posts in the area surrounding Tabaret al-Dibe hill and the surrounding hills after bringing under their firing range the villages of Abu Hbeilat, Abu Hanaya, Salba and other villages that are considered first lines of defense for ISIS in the direction of Ekeirbat, the main stronghold of ISIS in Hama eastern countryside