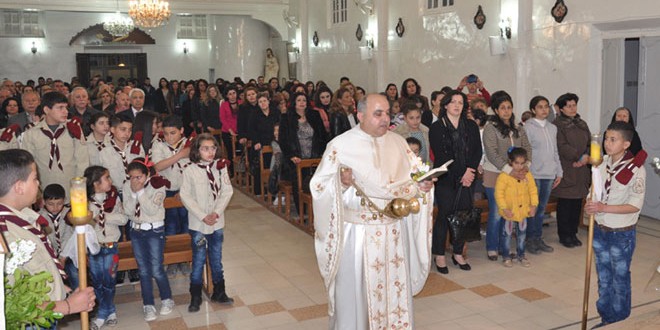 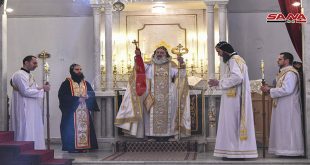 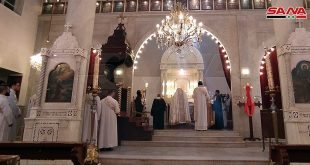 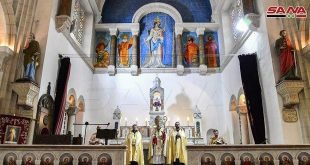 Damascus SANA_ Christian denominations in Syria, who follow the Western calendar, on Sunday celebrated Easter, the resurrection of Jesus the Christ.

Prayers and masses were performed at churches in celebration of Easter.

Patriarch Laham said during the sermon “Today, after five years of violence, war, destruction and bloodshed, the world discovers that the roads of Damascus, Jerusalem and Palestine are connected as they are the roads of faith, civilization and heritage”.

He called upon all people to follow the road of peace, life, reconstruction, reconciliation and amity, the road of Jesus Christ that gives life to all.

In the National Evangelical Church of Damascus, a mass headed by Rev. Peter Zaaour was organized. In his sermon, Zaaour said: “Syria is the land of prophets and it is a holy place. Let us protect it and keep it in our hearts and minds”.

He denounced all aspects of criminality used by the enemies of the homeland such as bombings, assassinations, human rights violations, the shedding of innocent blood and the kidnapping of innocent citizens.

In the Armenian Orthodox Archdiocese, Primate of the Armenian Church of Damascus Bishop Armash Nalbandian prayed to God to bless Syria and its people, calling for following the example of the Christ, the messenger of love and peace, for the sake of spreading the principles of love, justice and peace among all people.

Meanwhile in other provinces, masses and prayers were held in celebration of the occasion.

The Christian clergymen implored God for security and stability to prevail in all Syrian areas and to bless the Syrian land, people, leadership and army

They reiterated their absolute support for the Syrian Arab Army, stressing that Syria will triumph over terrorism.

Christian Denominations Celebrate Easter by Holding Prayers and Masses Easter 2016-03-27
Reem
Share
Previous General Command of Army and Armed Forces : Palmyra city and the overlooking mountains and hills have been fully controlled after a series of precise military operations carried out by army units, in cooperation with the popular defense groups and backed by the Syrian and Russian Air Forces.
Next The army tightens grip on Palmyra city