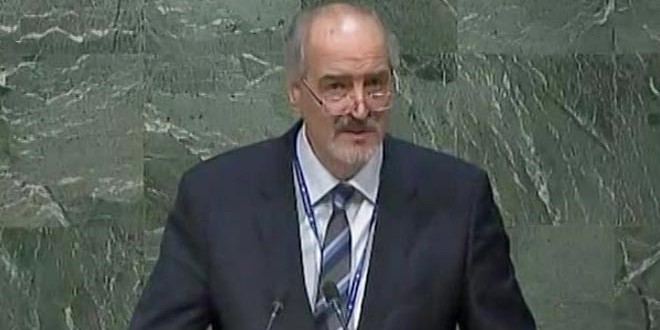 New York, SANA – Syria’s Permanent Envoy to the UN Bashar al-Jaafari said that the success in combating terrorism and countering violent extremism would be through commitment to UN relevant resolutions and keeping away from the double standard policy in dealing with this phenomenon.

Al-Jaafari, Speaking at UN General Assembly’s special session on discussing the Secretary-General’s Action Plan to Prevent Violent Extremism, al-Jaafari said that to have efforts of counter-terrorism succeed , this requires confronting violent extremism and terrorists and adhering to the UN Security Council resolutions, mainly  resolution Nos. 1624, 2170, 2178, 2199 and 2253, in addition to the UN strategy for combating terrorism and punishing governments which violate these resolutions and support terrorism.

He added that efforts to combat terrorism will not succeed without ending the Israeli occupation of the Syrian Golan and the occupied Arab territories in Palestine and Lebanon, and putting an end to Israeli settlers’ extremism against the Palestinian people.

Al-Jaafari called for putting an end to grievances and complaints stemming from violating the International law, the UN Charter, illegitimate foreign military interventions, unilateral economic coercive measures and discrimination based on religion, color, ethnic or nationality.

On the Secretary General’s report and action plan, al-Jaafari wondered about the criteria through which the international law can determine whether a persons’ extremism was violent or not and in which cases the violent extremism might be considered terrorism.

Al-Jaafari said that some countries name the foreign terrorists and mercenaries who were brought from all over the world to Syria and Iraq as “moderate opposition group,” saying “this is a surreal absurd scene.”

He added that the report has mentioned that the extremists recruited more than 30.000 foreign terrorists, from more than 100 UN member states, to head for Syria and Iraq, affirming that the number of terrorists is really much bigger.

Al-Jaafari inquired about the role of governments which fund, arm and facilitate the crossing of terrorists and if those mercenaries have succeeded in recruiting thousands of terrorists alone by themselves.

He asserted the report said the Islamic State ( ISIS) terrorist organization and other extremist groups have benefited from the armed conflict in Syria and the instability in Iraq and Libya, yet it deliberately disregarded the major reason behind  the terrorists’ emergence which is the illegitimate military interventions in UN member states.

“The report, just like previous ones issued by the General Secretariat, deliberately ignores Jabhat al-Nusra terrorist organization, aiming at legitimizing this organization and depicting it as “moderate armed opposition”.

“Syria has taken a number of procedures to confront extremism, violence and terrorism. The Action Plan includes important effective recommendations and proposals, but we are worried about the commitment of other states which may not be better than their commitment to the Security Council resolutions relevant to counter-terrorism which are publically violated by some member states,” al-Jaafari said 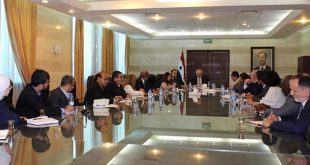