Rainfalls in most Syrian cities 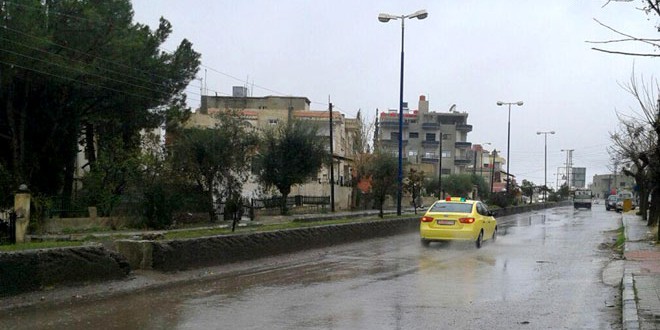 Damascus, SANA- Rains fell in various areas of the Syrian cities, the heaviest were 70mm in Hama, 60mm in Sweida, 55mm in Daraa and in Quneitra and 25mm in Aleppo.

Meteorology department said in its Saturday bulletin that temperatures will remain around or slightly higher than average as the country is being affected by a low air pressure accompanied by northwesterly air currents in the upper layers of the atmosphere.

It added that the weather will be clear to partly cloudy in general, rain showers are expected in the eastern areas and al-Jazira.

The winds will be northwestern of light to moderate speed, while the sea waves will be of low amplitude.

Ministry of Agriculture said in its rain bulletin that the rain amounts during the past 24 hours in the other provinces were as follows: 20mm in Damascus and its countryside, 35mm in Homs, 33,5mm in Tartous and14mm in Lattakia.

Rainfalls in most Syrian cities 2016-01-09
m.eyon
Share
Previous Cuba celebrates 57th anniversary of national Revolution victory
Next Some 27 wanted persons turn themselves in to the authorities