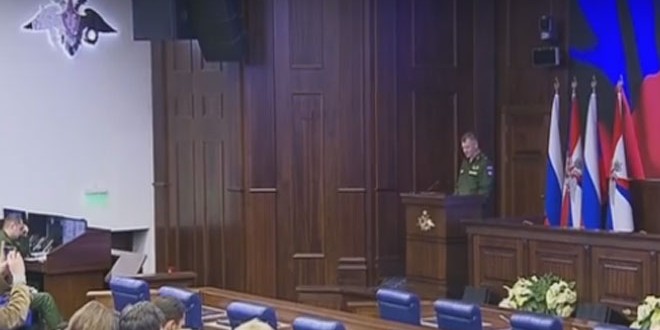 Moscow, SANA-Russian Defense Ministry affirmed on Wednesday that Russian warplanes carried out 302 sorties in Syria, destroying 1093 targets for terrorists during the last 5 days.

“The sorties targeted positions of terrorist organizations in the countryside of Aleppo, Idleb, Deir Ezzor, Hama and Homs,” Major-General Igor Konashenkov, spokesman for the Russian Defense Ministry said at a press conference.

He added that Russian Su-24 jets destroyed a major terrorist training camp in the area surrounding al-Habeit town in Idleb where a large group of terrorists from neighboring states came into the camp.

The spokesman added that the Russian warplanes destroyed a command- center for “Ahrar al-Sham Islamic Movement” in Ming village to the north of Aleppo city.

He went on to say that aSu-24 warplane targeted vehicles of the Islamic state (ISIS) in the area surrounding Mahin town to the southeast of Homs city, destroying 6 machine gun -equipped vehicles and 3 trucks.

Konashenkov pointed out that Russian warplanes targeted on Tuesday tens of oil tanks for the ISIS terrorists in Deir Ezzor, destroying two containers and three positions where terrorists loot petroleum from.

He denied allegations made by “Amnesty International” that the Russian Air Force is using cluster bombs, noting that journalists are present at Hmeimim airbase in Lattakia and take photos of the jets preparing for sorties.