Longest letter of loyalty to homeland makes a stop in Tartous 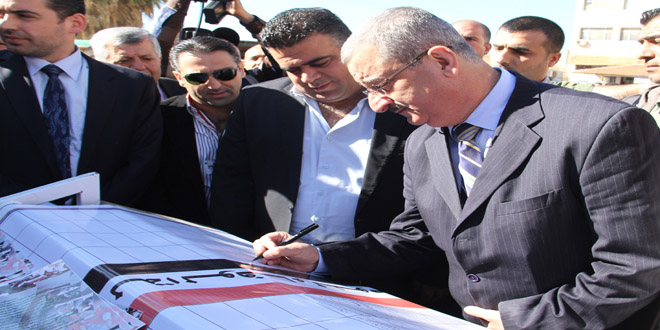 Tartous, SANA – With more than a half of its total length completed, the letter of loyalty to homeland and President Bashar al-Assad has its stop on Tuesday in the coastal Tartous province.

More than 1500 people from the province participated in an event held to collect more signatures in the letter, which will be the longest letter of 10 kilometers that is meant to present a popular petition to be filed to international judicial bodies to demand lifting the unjust economic sanctions imposed on Syria.

The letter will convey a popular demand for stopping interference in Syria’s internal affairs and bringing to account all the sides and parties that are involved in the Syrian bloodshed.

The participants in the event, held at Tartous Theatre, stressed that they all stand by President al-Assad to defend the homeland in the face of terrorism.

Today’s stop in Tartous followed various stations in Damascus and its countryside, Lattakia, Daraa and Sweida, as the letter, which has the Syrian flag featured on it, is going to collect signatures in all of the provinces.

The initiative is carried out by members of the volunteer “National Unity Gathering”.