Al-Halaqi: Syria steadfastness against terrorism thanks to its unity, support of friends 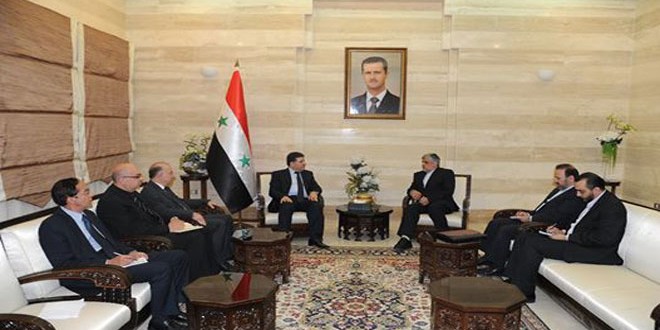 Damascus, SANA- Prime Minister Dr. Wael al- Halaqi affirmed that Syria has stood up to terrorism thanks to the unity of its people and army which is scoring daily victories, and the support of its friendly countries.

During a meeting with Iran’s Ambassador in Damascus Mohammad Reza Rauf Sheibani on Sunday, al-Halaqi noted to the historical relations between Syria and Iran, hailing the support provided by Iranian people and the leadership to promote the elements of the steadfastness of the Syrian people and the Syrian national economy.
In turn, Sheibani reiterated his country’s full support for Syria to achieve victory.

The meeting dealt with the economic, trade, industrial, pharmaceutical and development relations and mechanisms of enhancing them.