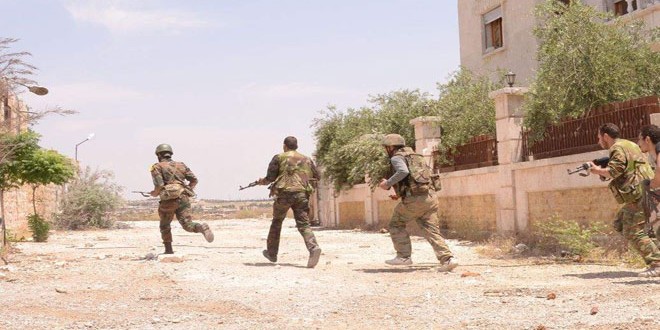 Provinces, SANA – More terrorists are getting killed as the army units continued operations against their positions, backed by the army’s air force that left many of the terrorist organizations’ hideouts and vehicles destroyed.

Field sources told SANA that clashes erupted with the infiltrating terrorists, who were forced to flee to the villages of al-Hamidiyeh, Ofania and Jabata al-Khashab, leaving their weapons behind after several of them were killed.

Another army unit hit a vehicle for terrorists on al-Hamidyeh-al-Hurriyeh road. The sources said the vehicle was completely destroyed, with all the terrorists on board it killed.

An army unit targeted Wednesday night a gathering of terrorists to the south of Khirbet Ghazala town, 20 km to the north of Daraa City.

The operation left a number of terrorists dead or wounded and a vehicle equipped with a heavy machinegun destroyed, a military source told SANA.

Another army operation took place in Atman town in the northern countryside of Daraa province where all members of a terrorist group were killed or injured and their arms and ammunition were destroyed.

The military source added that army units continued targeting positions of Jabhat al-Nusra terrorists in Daraa al-Balad neighborhood in the city of Daraa, destroying several of their hideouts in separate areas in the neighborhood.

At least 37 terrorists were killed during the army units’ continued operations in the countryside extending between Hama and Idleb with a cover from the Air Force.

Field sources said in statements to SANA that the terrorist Ismael Hanoura, one of the leaders within “Ahrar al-Sham Movement” was killed during operations on Khanaser-Atherya axis in the eastern countryside of Hama province.

The terrorists Hassan Yamani and Hamdi Saqour were killed in clashes between the army units and terrorist groups from “Jaish al-Fateh” in Skeik area in the northern countryside of Hama.

In Idleb countryside, a command center for terrorists in Kansafra village was destroyed during a special army operation in which at least 23 terrorists were killed.

Eleven other terrorists were killed during army operations that targeted Jabhat al-Nusra dens in Kfarsijneh and Maaret Hermeh villages, 60 km to the south of Idleb city.

The army’s air force raided dens of ISIS terrorists in al-Sheikh Ahmad, Kweris and Dir Hafer and in the surroundings of the Air Force Academy in the eastern and northern countryside of Aleppo.

An army unit also inflicted heavy losses in personnel and equipment upon ISIS terrorists in operations that targeted their dens in eastern Assfira, Al-Taiba and Um Arkila in the surroundings of the Air Force Academy too.

Army units defending Deir Ezzor military airport destroyed a car bomb for ISIS and killed many of its members.

Field sources told SANA that terrorist groups belonging to ISIS terrorist organization tried to infiltrate to the area surrounding the airport using a number of vehicles, including a car bomb.

The sources added that an army unit destroyed the vehicle with a missile before it reached the airport fence.

Army units clashed with ISIS terrorists who tried to reach the fence, leaving a number of them dead or injured while the rest fled away.

Daraa, SANA- Two children were martyred and two civilians were injured in a blast of …