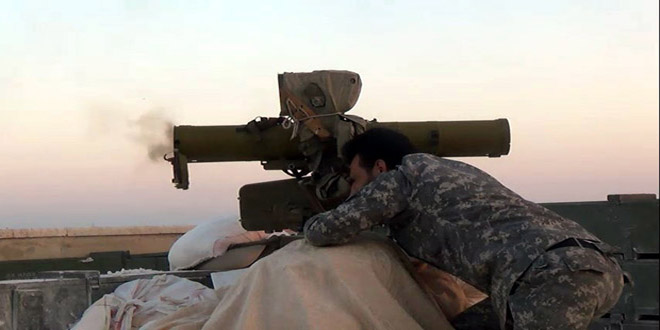 Provinces, SANA-A military source said the Russian jets, in cooperation with the Syrian air force, carried out a series of airstrikes against ISIS positions in Jisr al-Shughour, Maaret al-Nouman and al-Tabqa, destroying a number of warehouses storing weapons and command centers.

The source told SANA that the Russian air force in cooperation with the Syrian air force carried out a series of accurate airstrikes against ISIS positions, destroying a training camp in Kaslajok, shelters and mini-factories used for making weapons and ammunition, as well as 4 command centers in Jisr al-Shughour.

The source said a training center and an ammunition depot was destroyed near al-Tabqa city in Raqqa province, indicating that 3 successive strikes that left command centers and ammunition stores near Maaret al-Nouman in Idleb.

The source said that the strikes destroyed the control and logistic support for the terrorist organization.

Russian Defence Ministry said in a statement that the Russian fighter jets conducted 20 air raids against 10 ISIS positions in Syria which resulted in destroying a training camp and weapons depots in al-Tabqa City in Raqqa and a command center and weapons depots in Maaret al-Nouman in Idleb.

Hundreds of terrorists were killed or injured over the past 24 hours during operations carried out by army units, backed by the Syrian Army’s Air Force, in various areas in Aleppo province.

A serious of air strikes were launched on hideouts and movements of ISIS terrorists in the villages of Hmeimeh and Un al-Amad in the eastern countryside of Aleppo province, a military source told SANA on Sunday.

The source said a number of the terrorists were killed or injured and their vehicles, which were equipped with machine guns were destroyed in the airstrikes.

ISIS terrorists also suffered more losses as the army units targeted their positions in the vicinity of the Air Force Academy, located on the international road leading to Raqqa.

The army’s air force killed a number of terrorists and destroyed their vehicles in Mayer town in the northern countryside of the province.

In the western countryside of the province, the army targeted terrorists’ position in Daret Ezza city, while other terrorists had their hideouts, vehicles, some of which equipped with various machineguns, and supply routes destroyed in al-Ameriyeh village in the southern countryside.

An army unit killed a number of terrorists and destroyed their arms and ammunition in the vicinity of al-Nairab airport on the eastern outskirts of Aleppo city.

Meanwhile, field sources told SANA reporter that an army unit carried out a special operation killed all members of a so-called “Suqour al-Jabal Battalion” and destroyed their equipment on al-Kastello road towards the Turkish borders in the northern countryside of the province.

Three convoys of 25 cars and vehicles were also destroyed in Tadef, Rasm al-Imam, al-Kastello,al-Lairamoun and to the north of Mare’, according to the sources.

Army units thwarted an attack carried out by the ISIS on Deir Ezzor Military Airport, killing and injuring scores of terrorists, many of them of non-Syrian nationalities, and destroying their vehicles and weaponry.

The Syrian Army air force destroyed Takfiri Terrorist Organizations’ dens and vehicles in al-Qaryatain, al-Sa’an, and in the surrounding of al-Sha’er field in the countryside of the province.

Meanwhile, an army unit, in cooperation with popular defense groups, targeted a gathering of ISIS terrorists in om Sahreej village and destroying a a vehicle with all terrorists on board.
To the northwestern side of the province the army killed a number of Jabhat al-Nusra terrorists at the village of Kafar Laha in Tal Daw town.

For their part, terrorist organization admitted on the social network pages the killing of what they called head of religious affairs of Jund Badr Ibrahim al-Said brigades.

An army unit killed a number of Jabhat al-Nusra terrorists, injured others and destroyed their arms and ammunition in al-Sama’aleel village in al-Houleh area in the north western countryside of Homs.

A number of terrorists from Jabhat al-Nusra and other terrorist organizations were killed and their arms and munitions were destroyed during strikes by army units against their gatherings and axes of movements in Um Sharshouh, al-Farhaniya, Raba’a, al-Ghajar and al-Zamameer near al-Rastan 220 kilometer to the north of Homs.

The Syrian Arab Army’s Air Force carried out airstrikes targeting hideouts of ISIS in al-Rahjan village 50km northeast of Hama city, destroying vehicles along with the weapons, munitions, and equipment they were transporting.

A miltuiary source told SANA that the Air Force carried out concentrated strikes on concentrations of Jabhat al-Nusra and other terrorist organizations affiliated with it in Aqrab village in Hama’s southwestern countryside near the administrative line with Homs province, resulting in the death of a number of terrorists and destroying a number of their gatherings.

Air strikes also targeted ISIS sites east of al-Uqairibat in the province’s eastern countryside, killing a number of terrorists, injuring others, and destroying their weapons and equipment.

Northwest of Hama city, the Air Force targeted hideouts of terrorist organizations affiliated with Jaish al-Fateh in al-Latamneh and Kafr Zita, killing a number of terrorists, injuring others, and destroying vehicles along with the weapons and ammo they were transporting.

In Idleb province, the Air Force carried out airstrikes targeting hideouts of Jaish al-Fateh terrorists in Abdin village in the countryside of Ma’aret al-Nu’man, destroying a number of vehicles used by the terrorists.

The Air Force also targeted movements of Jabhat al-Nusra and other terrorist groups in Tal Marq and al-Habbit in Khan Sheikhoun area in the province’s southern countryside, which resulted in killing many terrorists and destroying their vehicles.

An Army unit launched concentrated strikes against dens and gatherings of “Jabhat al-Nusra” and other terrorist organizations in Rabia area to the north of Lattakia city.

The strikes resulted in the destruction of 5 vehicles, 3 of them equipped with heavy machineguns in addition to the killing of all terrorists inside them in Zahi and Beit Arab villages.

Large numbers of terrorists, most of them foreigners, were killed including Ahmad Sharshoh, Mazad Madah and Omar Bonjakli.

An army unit carried out a precise operation targeting hideouts and concentrations of terrorists from Jabhat al-Nusra and other terrorist organizations affiliated with it in the city of Bosra al-Cham 40km east of Daraa city.

A military source told SANA that the operations left a number of terrorists dead and injured others, most of them from Jabhat al-Nusra, in addition to destroying their weapons and munitions.

The army also killed and injured a number of terrorists and destroyed two of their vehicles, a pickup truck and bulldozer, while the terrorists were building fortifications on the road between Tafas and Atman in the province’s northern countryside.

In Daraa’s eastern countryside, army units eliminated a number of terrorists in the farms southwest of Kherbet Ghazaleh bridge and in the town of al-Ghariye al-Gharbiye.

An army unit, in cooperation with the popular defense groups, targeted dens and positions of terrorists in al-Otha village in the southwestern countryside of the southern Sweida province.

A number of terrorists were killed and their arms and equipment were destroyed during the operations.

The Takfiri terrorist organizations acknowledged on their social media pages the death of two of their groups’ leaders during army operations in the southern Quneitra  province.