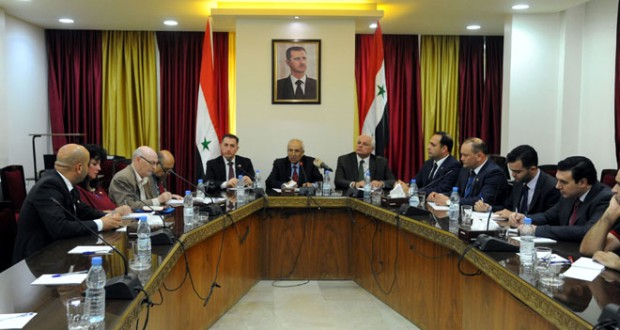 Damascus, SANA – Members of the visiting delegation of Belgian and Dutch political activists said on Saturday their visit to Syria aims at expressing solidarity with it in the face of the organized terrorism it is being subjected to.

The delegation met with Deputy Speaker of the People’s Assembly Fahmi Hassan, who stressed the need that the international community confront the crimes of terrorist organizations in Syria, especially now that they have become a threat to all countries of the world.

He called for abiding by the UN Security Council’s resolutions related to combating terrorism and holding its backers and financers accountable, demanding also a lift of the unjust economic blockade imposed on the Syrian people.

Hassan briefed the delegation on the current situation in Syria and the terrorist organizations’ repeated attacks targeting every vital sector, including electricity, oil and transport, in an attempt to debilitate the national economy and undermine the Syrian state’s capabilities.

On the political level, Hassan affirmed that Syria supports any political solution or initiative that would safeguard its unity and sovereignty, noting that the “Syrian opposition abroad” does not have a popular ground inside Syria and is subordinate to regional sides that seek to realize their own interests.

For his part, Chairman of the National Committee of Syrian Expatriates in the Netherlands Malek Samuel said the Syrian expatriates will never hesitate to support their homeland Syria and stand by its side in confronting the terrorist war waged against it, in addition to contributing to the post-crisis reconstruction stage. Assistant Regional Secretary of al-Baath Arab Socialist Party Hilal al-Hilal also met with the delegation, where he called upon the European countries to abandon their double standard policy towards the issues of the Arab world in general, and the war on Syria in particular, and to pursue clear policies based on respecting the sovereignty of countries.

The delegation members, for their part, said they have sensed during their visit to Syria that life is running normally and people are practicing their daily activities as usual, contrary to what some TV channels try to promote.

They noted that they will convey the true picture of the situation in Syria to their countries and parliaments to unmask the disinformation targeting it.

The delegation includes a member of the Dutch Socialist Party, Belgian political writers and analysts and representatives of the National Committee of the Syrian Expatriates.