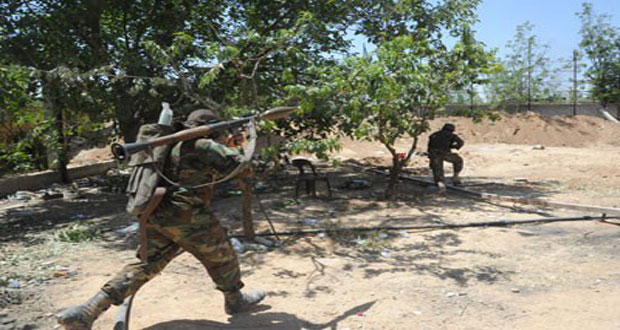 Provinces, SANA – Army units on Saturday carried out several operations against terrorists’ dens and gatherings, killing many and injuring others in several areas around the country.

In Damascus Countryside, the army targeted terrorists and their gatherings in the areas of al-Zabadani and Khan al-Sheeh, killing and injuring scores of them.

SANA field reporter said the army units carried out several operations in Harasta and Joubar, destroying a vehicle loaded with weapons and ammunition and killing many terrorists, including non-Syrians. Terrorists Kayed Abu Omeira from Iraq and Salem al-Abbasi from Jordan were identified among the dead.

The army targeted terrorists in Douma and Adra, killing 25 terroists in Douma, among them Walid Kanjo and Abu Ahmad Sheikh al-Qaseir and killing scores of terrorists of the Saudi, Jordanian and Tunisian nationalities.

The army continued operations in the outskirts of al-Mleiha and in Ein Tirma, where it killed anjnd injured a number of terrorists. Among the killed terrorists were Saeed al-Doumani and Nasser Himmo.

An arm unit clashed with terrorist group that tried to infiltrate al-Salam Highway in Damascus Countryside, killing all of the group’s members.

Army units targeted terrorists’ gatherings in the villages of Haurata, Om Sharshouh, al-Tiba in Homs countryside, killing many terrorists and injuring others.

In Daraa countryside, units of the Syrian Arab Army eliminated scores of terrorists, some of them are foreigners, in Inkhel town and destroyed their weapons.

In Idleb province, the army units destroyed a terrorist den in al-Zawya Mount area and eliminated scores of terrorists, some of them are foreigners, and destroyed a weapons cache and a number of vehicles equipped with heavy machine guns.

A den for armed terrorist groups was destroyed near Binnesh town in the countryside, killing and injuring all the terrorists inside it, in addition to destroying a heavy machine gun mounted on a car.

A military source told SANA that the army targeted terrorists’ hideout near Martin village in Idleb countryside, killing dozens of terrorists and destroying a number of their vehicles.

Army units destroyed a convoy of cars carrying terrorists on the Jassem Nemr road and a number of other cars transporting terrorists near al-Aliya town, al-Mahs hill, al-Jabiye hill, and Nawa.

Other units prevented a terrorist group from sneaking towards Nahid hill in Daraa western countryside, leaving its members dead or injured, while a unit destroyed a hideout for terrorist leaders, an ammo cache, and a terrorist gathering in the town of al-Ghariye al-Gharbiye, resulting in the death and injury of many terrorists.

A unit of the armed forces targeted terrorists’ gatherings in the areas of Sabah al-Kheir and Abiad in southern Hasaka, leaving numbers of terrorists dead and wounded and destroying their weapons and ammunition.