Army pushes ahead with military operations, killing over 100 terrorists around al-Tha’leh airport 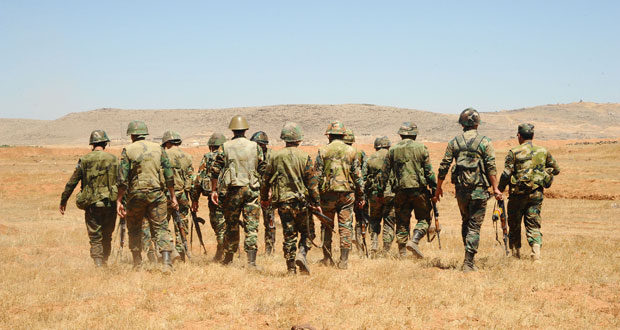 Provinces, SANA-Units of the army and armed forces on Thursday continued to launch wide-scale military operations against the terrorist organizations across the country, destroying their dens and vehicles in addition to killing large numbers of terrorists.

Meanwhile, a military source said the army units foiled several attempts by terrorists to infiltrate al-Tha’leh airport, leaving at least a 100 of them killed, in addition to destroying dozens of armored vehicles.

The army units, the source told SANA, carried out a series of special operations in which they targeted Jabhat al-Nusra terrorists in the villages of Um Walad, al-Karak and Rakham in the countryside of Daraa province that are surrounding the airport.

Dozens of terrorists were reported killed during the operations, according to the source.

The army established full control on 16 blocs to the south-west of SyriaTel in Daraa al-Balad, destroying dens of Jabhat al-Nusra terrorists.

Earlier, the source said the army units killed 22 Jabhat al-Nusra terrorists in the villages of Um Walad and al-Karak al-Sharqi and destroyed an armored vehicle and a mortar launcher.

Many Jabhat al-Nusra terrorists were killed and a mortar launcher was destroyed during army operations that targeted their positions in Ataman town, 4 km to the north of Daraa city.

Army units also targeted dens and groups of terrorists of Jabhat al-Nusra and the so-called “Al-Muthana Islamic Movement” in the southern part of Kafr Shams town and in Kafr Nasej in the northwestern countryside of Daraa province. Many of the terrorists were killed.

The army killed a number of terrorists, destroyed their vehicles in Um Walad, Tal Khleif, Skaka, Kurd and Tal al-Sheikh in Daraa countryside.

In the city of Daraa, an army unit destroyed hideouts of terrorists in the quarters of al-Sibeh and Suweidan Street in Daraa al-Balad neighborhood.

Meanwhile, the terrorist organizations acknowledged on their social media pages the deaths of 22 of their members.

Later, dozens of Jabhat al-Nusra terrorists were killed and many others were injured and their vehicles were destroyed, including those with machine guns mounted on them, as army units targeted their gatherings in al-Mleiheh al-Sharqiyeh, al-Mleiheh al-Gharbiyeh and to the south of Tal al-Sheikh Hussein (hill) in the countryside of Daraa province.

A unit of the army destroyed vehicles of the so-called Ajnad al-Sham and al-Rahman corps terrorist groups in Zibdeen and Dir al-Asafer in eastern al-Ghouta in Damascus countryside.

The army also destroyed a vehicle and killed all terrorists onboard in Harasta northern farms.

In the southwestern countryside of Damascus, an army targeted dens and gatherings of Jabhat al-Nusra terrorists to the west of Saasa town.

The operations in the town, which is located near the eastern countryside of Quneitra, left a number of the terrorists killed or injured and their arms and ammunition destroyed.

The Army Air Force morning carried out a number of air strikes against dens and positions of Jaish al-Fatih terrorists in the countryside of northern Idleb province.

More air strikes were launched on dens and positions of Jabhat al-Nusra and other terrorist organizations in al-Najiyieh village and Jisr al-Shughour city, leaving scores of terrorists dead and destroying their arms and ammunition.

The airstrikes also targeted dens of Takfiri terrorist organizations in Ariha city and to the west of Mhambel and Mar’aian village, killing scores of terrorists.

Elsewhere in the province, a number of terrorists were killed and their arms and ammunition destroyed in raids carried out by the army against  their dens and positions in the villages of al-Majas, and Hemaimat and in the town of Abu al-Dohour in the eastern countryside of the province.

Air strikes also destroyed several hideouts and vehicles of terrorists, leaving dozens of them dead, in Abu al-Duhour, al-Majas and Ein al-Hamra in the countryside of Idleb province.

The army killed a number of terrorists, destroyed their vehicles in Um Walad, Tal Khleif, Skaka, Kurd and Tal al-Sheikh in Daraa countryside.

The Army air force targeted terrorists’ gatherings in the area surrounding the Artisans Association, south of Tal Jabin, Anadan, Hreitan and Mayr in Aleppo and its countryside, eliminating tens of them and destroying their vehicles.

A military source told SANA that the army air force destroyed vehicles and killed a number of terrorists in Jana al-Elbawi village, 14 km to the north of Salamiya in Hama countryside.

The source added that the air strikes eliminated dens for terrorists and killed many of them in al-Mintar and Akerbat villages, 70 km to the east of Hama.

Other terrorists were killed in Taloul al-Hamr in Hama southern countryside.

The Army Air Force carried out several raids targeting Islamic State in Iraq and Syria (ISIS) terrorists’ movements at the surroundings of Jazal, Bayarat Tadmur and Jbab Hamad, killing dozens of them and destroying scores of their vehicles equipped with machineguns.

A number of ISIS terrorists were killed and their vehicles destroyed in a series of blows carried out by the army air force on terrorists’ hideouts and positions in al-Suwaneh area.

Meanwhile, the air force carried out several raids on ISIS terrorists’ gatherings and hideouts in al-Nasrani Mountain and the village of Habra al-Gharbiyeh in the southeastern countryside of the province, killing scores of them and destroying their vehicles equipped with machineguns.

Later, an army unit clashed with ISIS terrorists who attacked the residents of Um Jame’ village in the eastern countryside of Homs province.

The clashes left a number of terrorists killed and their weapons and ammunition destroyed.

In the northern countryside of Homs, army units targeted terrorists’ hideouts in Taldo in al-Houla area, leaving a number of them dead or wounded.

Units of the army and the armed forces continued to carry out special operations against dens and supply routes of the armed terrorist organizations in the countryside of the coastal Lattakia province.

A number of terrorists from Jabhat al-Nusra and from the so-called Jaish al-Islam and Ahrar al-Sham Islamic Movement were also killed in directed blows carried out by the army against their positions in the villages of al-Khadra and al-Soda.

The operations resulted in destroying stores of ammunition, arms, vehicles and various types of machineguns that belong to the terrorists.

Among the killed self-claimed terrorist leader of one of the Takfiri groups Bashir al-Dabkan who is nicknamed Abu al-Hasan was identified.