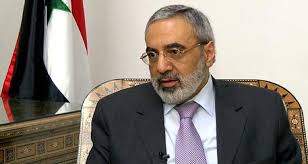 “Any evaluation to what is going on in the country, away from acknowledging the presence of the Islamic state in Iraq and Syria (ISIS) and Jabhat al-Nusra terrorist organization, and the role of Saudi Arabia, Qatar and Turkey in addition to the foreign role in supporting the terrorists, is a not understandable and meaningless evaluation,” Minister al-Zoubi told al-Mayadeen TV in an interview broadcast Wednesday.

He affirmed that there is a Turkish project in the region, Saudi funding and Qatari interests, but “our choice, as Syrians, is to defend Syria and its unity in addition to our choice in the political solution and national reconciliation.”

“Nothing would be at the expense of the Syrian state… President Bashar al-Assad is the key of solution and he will lead the political solution in the region,” Minister al-Zoubi added.