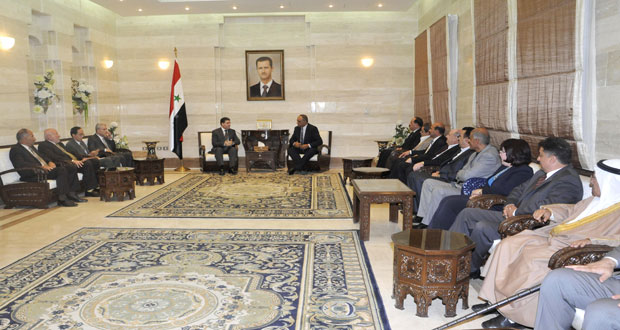 Damascus, SANA Prime Minister Wael al-Halaqi stressed to a delegation of local figures from Daraa the great attention the government pays to the development, livelihood and services situation in the province, located in southern Syria.

The government, he added, is interested in the situation of those sectors in all the provinces and seeks to ensure balanced development through overcoming obstacles and easing challenges.

The Prime Minister regularly holds meetings with delegations from all the provinces to activate communication with all components of the Syrian society and get acquainted with the needs and requirements of each province.

The main issues that were discussed during today’s meeting with the delegation from Daraa were the agricultural and animal situation and the mechanisms to market agricultural products and crops, basically wheat, in addition to the efforts to establish supporting industries in the province.

A call to accelerate steps to achieve more local reconciliations that are very helpful to consolidating security in the province was also on the table.

On this issue, members of the delegation said they are determined to work on achieving reconciliations, expressing support for the Syrian leadership and army in their efforts of fighting terrorism.