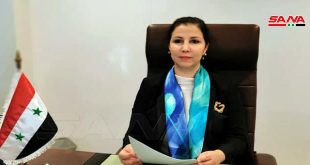 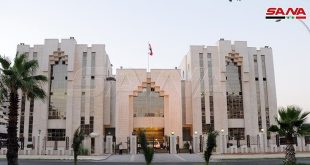 Aleppo, SANA-Assistant regional Secretary of al-Baath Arab Socialist Party Hilal al-Hilal affirmed on Wednesday that Aleppo was and still is a strong fortress, thanks to the struggle of its citizens, sacrifices of the army and their unity while confronting the attacks of armed terrorist organizations.

“Life in Aleppo runs with a better pace, it is in an increasing positive status on the military, economic and services levels to refute rumors and lies broadcast by channels of shedding the Syrian blood,” al-Hilal said at a meeting with popular, party activities in the Syrian northern city.

He added Syria will remain the homeland of all its sons and it will not abandon the national rights and principles.

For his part, Justice Minister Najem al-Ahmad said Aleppo city has a special place at all national and honest citizens and it gains the government’s interest, adding the Ministry will soon automate the judicial work in the city.

On Tuesday, al-Hilal affirmed that the terrorist coward acts which target Syria an indication to the weakness and bankruptcy of terrorists who are defeated in front of the Syrian army.

“Aleppo families have recognized the volume of conspiracy and confronted it through the popular support and unity with the army which defends Homeland to achieve victory over mercenaries,” al-Hilal said at a tour into al-Sleimaniya neighborhood in Aleppo to inspect the volume of destruction caused by terrorist rocket shells.