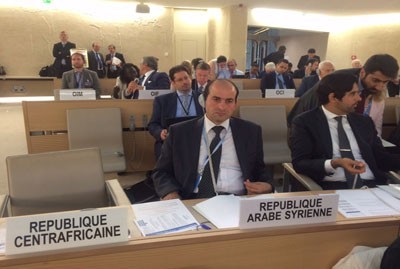 Geneva, SANA, Syria criticized Tuesday a report issued by the international Commission of Inquiry on the situations in Syria as politicized, biased report which relied on misguided information given by hostile sides against the Syrian people.

Representative of the Permanent mission of the Syrian Arab Republic at the UN in Geneva Mohammad Mohammad recited Syria statement during an interactive dialogue session at the Human Rights Council in Geneva, saying “the Commission has proved that it facilitated the implementation of political agendas presented by hostile countries against Syria,” adding such immoral role will lead to a dangerous relapse of international law principles, UN Charter, based on that, Syria rejects the unprofessional reports of the Commission.

Mohammad added Syria has affirmed that the Commission’s reliance on false testimonies for alleged victims and witnesses wanted for justice, and even terrorists, confirms again that the criterion of evidence on which the Commission has claimed that it was registered in its investigations was not available.

Syria representative pointed out to the Commission’s ignorance of the objective connections between the increasing number of terrorist crimes and the deteriorating situation in Syria where the crimes perpetrated by the Takfiri groups and targeting of infrastructure and service institutions increase.

Mohammad said the Syrian government is committed to offering the humanitarian needs to the Syrian people indiscriminately, in cooperation and coordination with the international relief agencies in spite of the coercive, unilateral and unfair procedures imposed by hostile states against Syria.

He added the crimes and atrocities perpetrated by terrorists push the Syrian State to practice its constitutional role in protecting its people and combating terrorism.

Mohammad affirmed Syria is also carrying on its duty to end the crisis through peaceful Means, settlements and reconciliations in different regions of the country, expressing regret over the Commission attempt through its report to put those reconciliations out of their logic context.

He was astonished at the report’s disregard of the Amnesty decree, issued by President Bashar al-Assad, which came to consolidate the State’s tolerance, adding “Any report which seeks objectivity can’t ignore the flow of millions of Syrian people inside and outside Syria to determine their democratic choices and elect their President.