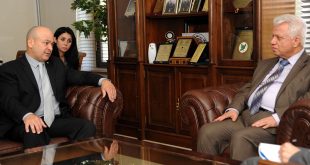 Damascus, SANA – Venezuelan Ambassador in Damascus and Rector of Damascus University
discussed Thursday preparations to organize a dialogue forum to enlighten students of both sides about the recent events in Syria and Venezuela.

The forum aims to educate students on the main similarities between the recent US-plotted coup attempt in Venezuela and the foreign-backed terrorist war going on in Syria since 2011.

Students are to be provided an insight into the underlying goals behind the conspiracies targeting both countries.

On the sidelines of the meeting, Ambassador Imad Saab and Rector Mohammad Hassan al-Kurdi visited a memorial for the late Venezuelan President Hugo Chavez that lies in a park inside Damascus University’s campus, marking the second anniversary of Chavez’s death.

The holding of the dialogue forum and other intended activities, Saab said, aims at using the opportunity of the anniversary to stress that Syria and Venezuela share the same enemy, and that the conspiracies seek to undermine the states and people of both countries.

Chavez sought through his relationship with Syria and other friendly countries to support liberal thinking in anti-imperialism countries and have the latter unifying their efforts to confront imperialism to secure peace for the world’s people, added the Ambassador.