A convoy of equipment, electrical transformers arrives in Idleb to support power network 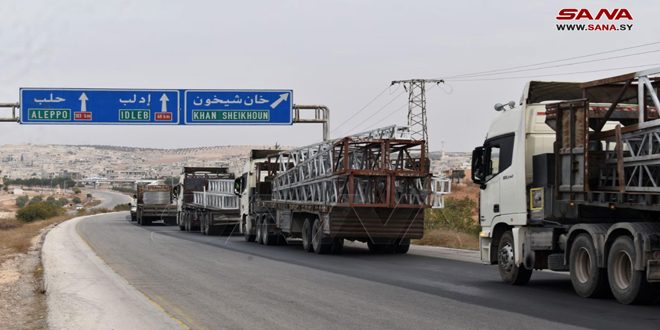 Idleb, SANA- A convoy of electrical supplies and equipment was sent by the Electricity Ministry on Thursday to Idleb province.

That came in a step to support the work of the electrical networks, and rehabilitate those affected by terrorism in the liberated countryside of the province, especially in the areas of Ma’aret al-Numan and Khan Sheikhoun.

The convoy, consisting of 18 trucks and vehicles, includes various types of equipment that will be distributed according to priorities to the neediest sites, which serve the largest possible number of people returning to their homes to increase the reliability of the electrical network.

Minister of Electricity, Eng. Ghassan al-Zamel, said in a statement to reporters that this convoy comes within the framework of government support to rehabilitate the electrical system and improve the electricity situation and its stability in the liberated countryside of Idleb Province.

Minister al-Zamel added that the convoy includes transformers, towers, cables and aluminum cordages for the rehabilitation and maintenance of the electrical system.

The Minister also inspected the 20-66 kilovolt power transmission station of Talaas and the damage inflicted on it as a result of terrorism, and the delivery of equipment and supplies necessary for the electrical connection project for the city of Ma’aret al-Numan with the city of Khan Sheikhoun, with a length of about 28 kilometers.