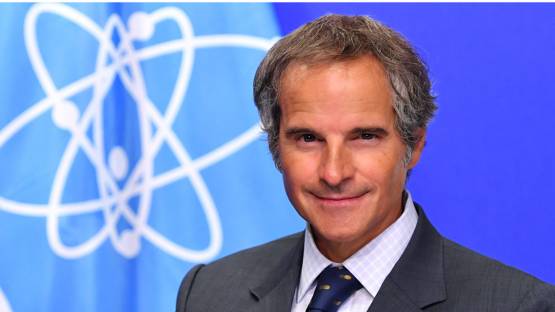 NEW YORK, SANA-Consultations conducted by the International Atomic Energy Agency (IAEA) with representatives of Russia and Ukraine on the creation of a safety zone around the Zaporozhye nuclear power plant are continuing, there is progress, Rafael Grossi, the agency’s Director General, told CNN on Wednesday.

“I am having consultations with both. I would not agree with the assessment that we are not making any progress, I think we are. Of course, we are talking about something which is very difficult. This is war. This is real war and the protection zone that I am proposing is precisely on the front line, on the line where both adversaries are in contact. But we are moving forward, I believe,” he noted.

Grossi also pointed out that to avoid a nuclear accident, the organization “cannot continue counting on good luck.” According to him, the IAEA finds it “very difficult to identify” who exactly is shelling the Zaporozhye nuclear power plant, but the agency’s task is to ensure its safety and not “to get into a game of attribution.”

Earlier, Mikhail Ulyanov, Russia’s permanent representative to international organizations in Vienna, told TASS that proposed measures to create a safery zone around the Zaporozhye nuclear power plan would not call into question Russia’s control over the plant.

Grossi met on Wednesday in Istanbul with a Rosatom delegation, headed by its CEO Alexey Likhachev, and discussed the creation of a safety zone around the Zaporozhye nuclear power plant. Earlier, Grossi stated that the creation of a safety zone around the plant was an absolutely realistic task. He pointed out that he held consultations on this issue with Ukraine and Russia. According to him, the plan for the creation of the safery zone proposed by the IAEA includes “exclusively items related to nuclear safety” because Moscow and Kiev were ready to cooperate on such a basis.

The Zaporozhye nuke plant is the largest one currently operating in Europe. Russia took control of the facility on February 28, during the first days of its special military operation in Ukraine. The plant continued to operate normally. An IAEA mission led by Grossi visited it in early September. After the delegation left the site, the agency’s staff remained there as observers. Later, the IAEA published a report calling for the creation of a safety zone around the plant to prevent emergencies due to hostilities.