Irwani: We appreciate Syria’s efforts to implement its obligations under the Chemical Weapons Convention 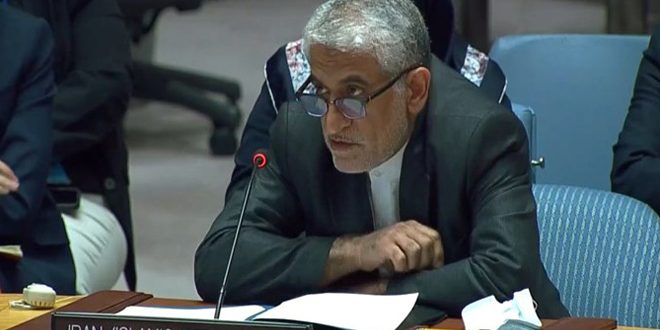 New York,SANA- Iran’s permanent representative to the U N, Amir Saeed Irwani, affirmed that Syria is fully implementing its obligations under the Chemical Weapons Convention, calling for continued communication and interaction between it and the Organization for the Prohibition of Chemical Weapons.

“In light of the Syrian Arab Republic’s compliance with the requirements of the Chemical Weapons Convention and its continued constructive cooperation with the Organization for the Prohibition of Chemical Weapons, politicizing this issue and adopting double standards will only divert discussions from their nature, casting doubts on the credibility and authority of the Security Council and weakening it” , Fars news agency quoted Irwani as saying at a meeting of the UN Security Council on Thursday.

Irwani voiced Iran’s appreciation to the Syrian government for submitting the 166th monthly report to the General Director of the Organization for the Prohibition of Chemical Weapons.

Iran has repeatedly condemned in the strongest terms the use of chemical weapons by anyone, anywhere and under any circumstances,
It considers that the use of such inhumane weapons constitutes a serious threat to international peace and security, and must not be tolerated.

Irwani explained that the only way to ensure that chemical weapons are not used again is to eliminate all of these weapons globally.

He stressed that politicizing the implementation of the Chemical Weapons Convention and the use of the OPCW for political purposes endangers the legitimacy of “this agreement and this organization.”

Washington, SANA- A fire broke out aboard a U.S. Navy aircraft carrier, resulting in minor …