A terrorist blast with an explosive device ripped through a passenger bus in al-Kallaseh area near al-Hamidieh market in Damascus. Six were killed and 24 others were injured according to an initial toll.

The Iranian foreign ministry’s spokesperson Marziah Afkham said in a statement on Monday that the culprits involved in this attack are the ones who are supplying terrorists logistically and financially, pointing out that this support is continuous and is justified by arming what is called “moderate opposition.”

Afkham pressed the United Nations to work responsibly and diligently to fight terrorism and oblige terrorism-backing countries to follow through on their obligations to this effect. 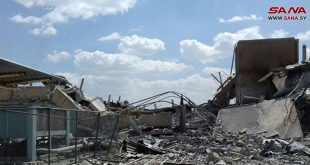 (Chemical File) … Politicization and Falsification of Facts to Target Syria

Damascus, SANA- The US and a number of the Western states are continuing to use …