Syrian antiquities, through a Dutch eyesight, decorate the wall of the National Museum in Damascus 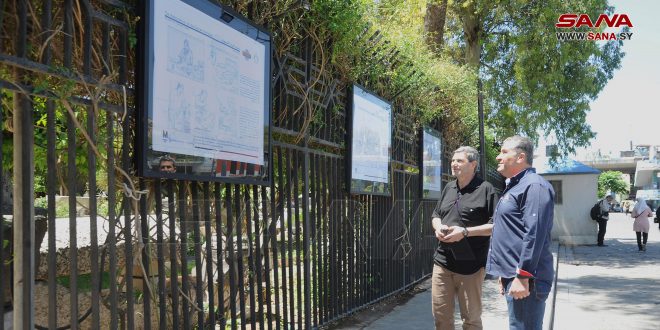 Damascus, SANA- After 36 years, Dutch archaeologist and artist Theo de Feyter returned to the garden of the National Museum in Damascus to spread the fragrance of his love for Syria, its history and heritage through paintings in which he embodied its archaeological sites, influenced by its people’s ability to live and rise from the rubble. The exhibition that decorated the wall of the museum entitled “Restoration of the Syrian Heritage through Theo Feyter’s eyesight,” included 15 works consisting of drawings and paintings about Syrian archaeological sites during his trip to the country from 2019 to 2021, like the Great Mosque in Aleppo, Krak des Chevaliers, the Mamluk Palace in the old city of Homs and the Temple of Bel in Palmyra.

It also covered the great efforts of Syrian archaeologists to restore what has been destroyed during the war, documenting the tremendous progress that has been achieved in restoring Syria’s heritage, as well as new excavations by local and foreign teams.

Minister of Culture, Lubana Mushawah, told SANA in a statement that the Dutch archaeologist and artist, who loved Syria, has worked in the country since 1985 as an antiquities’ student, where he learned about the reality of its civilization and its people,

“When he returned to Syria in 2018, he was shocked at the destruction he saw in the sites he has known, so he decided to immortalize these scenes.

Mashawah considered that the exhibition is a historical document for the Syrians and the West that depicts to the world what Syria has suffered from terrorism. 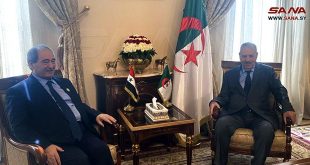