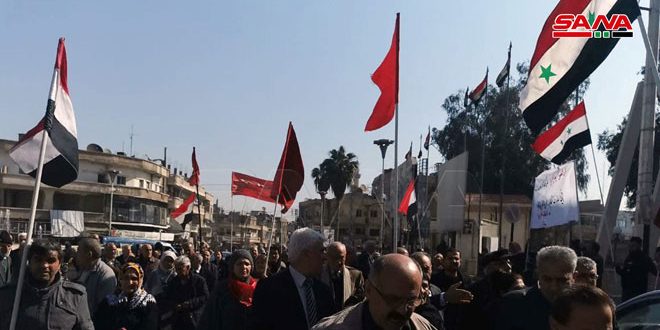 Hasaka, SANA- The educational cadres in al-Furat University branch, the Directorate of Education, the Teachers Syndicate and the committee of the Syrian Communist Party on al-Jazeera region staged a protest at the President Square in Hasaka city in denunciation of US and QSD militia crimes targeting the education sector in the province.

Hundreds of students, teachers, university professors and partisan and civil bodies participated in the protest which was held under the motto “Hands off our collages, institutes and schools”. The participants raised banners denouncing the US crimes and destruction of the university buildings and infrastructure, and QSD militia’s measures which aim at depriving thousands of students of education according to the official curricula of the Ministry of Education.

The participants expressed their denunciation against the US occupation systematic attacks against the educational process in Hasaka Province through targeting primary, preparatory and secondary education, according to Director of al-Furat University branch in Hasaka, Dr. Jamal Abdullah.

Dr. Abdullah added that they are continuing their destruction of university education and its infrastructure, calling for unifying the stances to convey a message to the whole world that the US occupier is a war criminal and it must be eliminated from our land immediately.