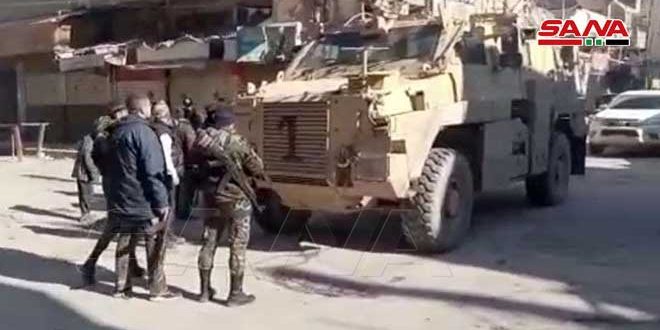 Hasaka, SANA- Units of the Syrian Arab Army intercepted a convoy of US occupation forces’ vehicles in Hasaka center city. SANA’s reporter in Hasaka said that two military vehicles belonging to the US occupation forces tried to enter the center of Hasaka city next to al-Najma pharmacy in the middle of Palestine Street, and the Army’s checkpoint forced it to retreat and leave the area.

Cases of preventing and intercepting convoys affiliated to the US occupation forces were repeated by the Syrian Arab Army and citizens in the countryside and cities of Hasaka province.

2022-01-28
Manar
Share
Previous Settlement process continues in the center of Daraa city
Next Ambassador Ala : Terrorism , embargo and occupation cause grave violations of Human Rights in Syria