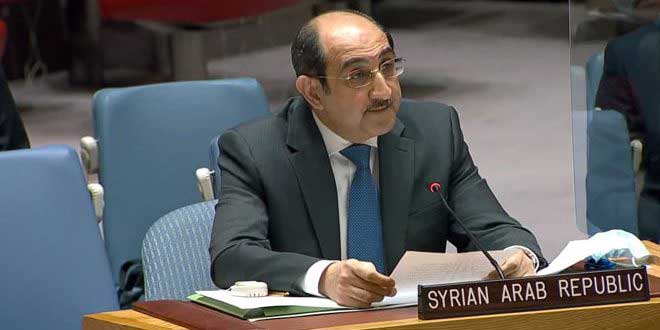 New York, SANA -Syria renewed its right to restore the entire occupied Golan by all possible means guaranteed by international law, arresting that all measures taken by the Israeli occupation to change the legal status of the Syrian Golan and impose its mandate on it are null and void and have no legal effect under the international law and the UN resolutions.

In his briefing during a UN Security Council session on Wednesday on the “Situation in the Middle East”, Syria’s permanent representative to the UN, Ambassador Bassam Sabbagh said that it is deplorable that the UN Special Coordinator for the Middle East, Tor Wennesland did not included in his reports the Israeli colonial activities in the occupied Syrian Golan and its other practices in it, in addition to ignoring the Israeli repeated aggression on the Syrian lands, the most recent of which was the Israeli aggression on Lattakia commercial port, which caused huge material losses.

Sabbagh pointed out that Syria sent several letters to the UN Secretary-General and its envoy for the Middle East to inform them of the developments on the situation in the occupied Syrian Golan and warn them against the danger of Israeli repeated aggressions on the stability of Syria and the region.

The Syrian Ambassador reiterated Syria’s condemnation of the flagrant violations committed by the Israeli occupation in the Golan, including seizing its land and properties, imposing demographic change and plundering its natural resources.

He reaffirmed Syria’s firm commitment to its right in restoring the entire occupied Golan till the Line of June 4, 1967  by all possible means gauranteed by international law that are not subject to relinquishment or prescription.

Sabbagh stressed that all Israeli occupation’s measures that aim at changing the natural and demographic characteristics of the Golan or imposing its laws and jurisdiction are null and void and have no legal effect under international law and relevant UN resolutions, particularly Resolution no. 497, calling upon the UN member states not to recognize the occupation’s measures in occupied Golan and to condemn its hostile practices  in it and put an end to them.

The demand by Israeli occupation representative to condemn a defenseless people who resist the occupation by stones is considered as the ‘height of hypocrisy’ which aims at distracting the world’s attention from his entity’s repeated aggression for decades with rockets, heavy weapons and bullets against the Palestinians, Syrians and Lebanese, Sabbagh concluded.