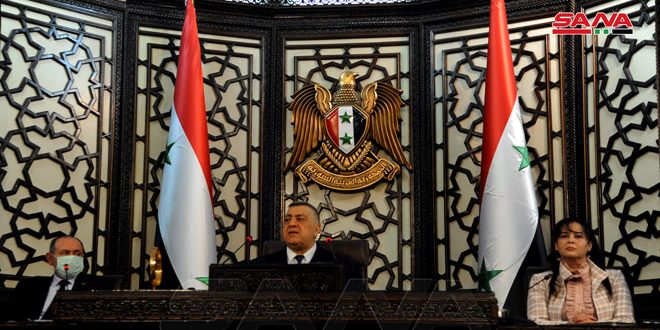 Damascus, SANA- People’s Assembly Speaker Hammouda Sabbagh affirmed that citizens of occupied Syrian Arab Golan bear national responsibility in facing the practices of the usurping Zionist occupation entity through adhering to their Arab and Syrian Identity and rejecting the methods of persuasion and intimidation that were imposed on them, showing confidence on that the liberation day will inevitably come.

Sabbagh stressed in his speech on the 40th anniversary of the ominous decision of the Zionist entity to annex the occupied Syrian Arab Golan during the Assembly’s session held on Tuesday that the struggle of the Syrian Arab people is based on fulfilling their principles, on top of which the restoration of entire land of Golan and the liberation of prisoners and detainees from the prisons of the lsraeli occupation. Sabbagh pointed out the aforementioned annexation decision is illegal , as the UN General Assembly issued during its meeting by an overwhelming majority a resolution calling upon the usurping entity to withdraw from all the occupied Arab lands.

Sabbagh concluded his speech by saluting the souls of the martyrs of the Golan and the righteous martyrs of Syria, the steadfast and patient people in Golan and the personel of the Syrian Arab Army, those who protect the homeland under the leadership of President Bashar al-Assad.