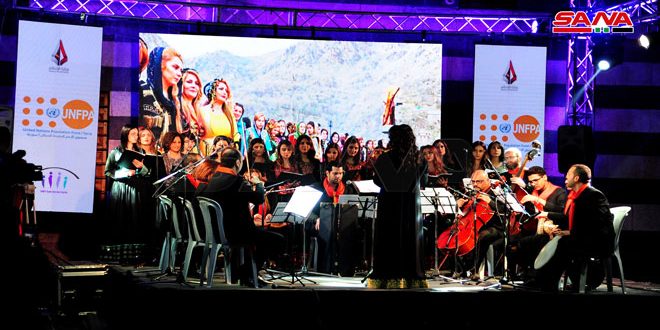 Damascus, SANA- Information Ministry, in cooperation with the United Nations Population Fund (UNFPA) on Wednesday launched the activities of the 16 Days of Activism against Gender-Based Violence campaign in Syria under the motto “Safety for All.. Gender-based Violence Unacceptable” in Khan As’ad Pasha in Damascus.

The ceremony included a concert performed by Gardenia Choir and a screening of a video that narrates the stories of the success of Syrian women who have challenged the crisis in the country and benefited from the services offered by the UN Fund. The 16 Days of Activism against Gender-Based Violence is an annual international campaign that kicks off on 25 November, the International Day for the Elimination of Violence against Women, and runs until 10 December, Human Rights Day. It was started by activists at the inaugural Women’s Global Leadership Institute in 1991 and continues to be coordinated each year by the Center for Women’s Global Leadership.

The global theme for this year’s 16 Days of Activism against Gender-Based Violence, which will run from 25 November to 10 December 2021, is “Orange the world: End violence against women now!”

Assistance Information Minister Ahmad Dawa expressed the Ministry’s keenness on spreading awareness in regard to the issues related to gender-based violence, as the Ministry broadcasts media and educational materials within deliberated programs, some of which are carried out in cooperation with the Fund. There are unprecedented cases of Gender-based violence in the areas controlled by the US and Turkish occupations and their tools from the armed terrorist organizations east and northwest of Syria, Dawa warned.

In a statement to journalists, Dawa said that Syria was one of the pioneer countries which cooperated with the UN organizations in the field of the campaign even during the years of the crisis and the outbreak of coronavirus pandemic.

Resident Representative of the United Nations Population Fund in Syria Dr. Iyad Nasr said in a similar statement that the16 Days of Activism against Gender-Based Violence is a call for the communities to do what is necessary to limit this kind of violence.
Nasr expressed the UNFPA support to the women and girls in Syria and the world, particularly in the critical economic situation and the outbreak of coronavirus which have increased the suffering of the women.

In turn, the responsible of the media and communications at the Fund, Kinda Qatranji, said that the Syrian women play a key role in keeping the safety of the Syrian family and society following the years of the war.

Qatranji indicated intensifying the activities related to the occasion in cooperation with governmental bodies and civil associations in several Syrian provinces, through lighting buildings and archeological sites in Damascus in orange, “the motto of the campaign”.