A stand in Aleppo countryside in rejection of Turkish occupation, condemnation of its crimes 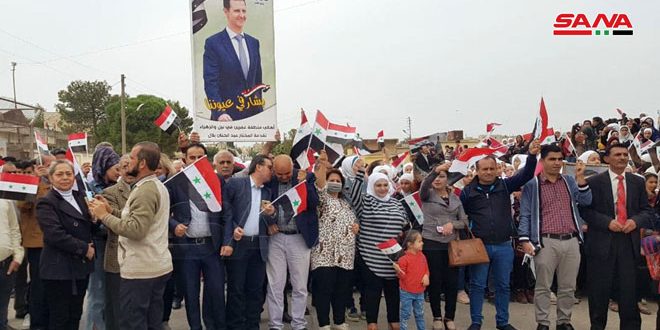 Aleppo, SANA- The locals in Deir Jamal village in Aleppo countryside have staged a national stand in  rejection of the Turkish occupation and its mercenaries from the terrorist organizations. The participants condemned their brutal crimes against the civilians in the areas they have occupied.

They expressed rejection of targeting the Syrian sovereignty, calling for facing all forms of partitioning and separatist trends.

Over the last days, the locals in Tal Refat and Kafer Naseh and the adjacent villages in Izaz area in Aleppo northern countryside staged a stand in rejection of the Turkish occupation and its mercenaries from terrorist organizations. The locals condemned their crimes against the Syrian citizens.