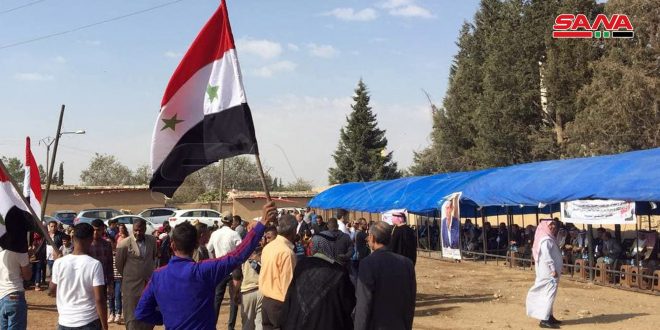 Hasaka, SANA- The locals in Safia village in Qamishli countryside have staged a national stand in rejection of the illegitimate presence of US and Turkish occupation forces as they undermine the security in the region, and they plunder its resources.

During the stand, the locals raised national flags and banners condemning the illegitimate presence of the US and Turkish occupation forces, and chanting slogans against the occupation forces and their mercenaries.

He added “the Syrian people, with all their spectrum, reject the American and Turkish presence and denounce the brutal practices against our people in Tal Tamir and Ras al-Ayn.”

Hassan Salloumi from al-Ghannama clan of the Arab Tayy tribe said that the locals in the region “trust the Syrian Arab Army and consider it the only national institution capable of restoring security and safety, establishing stability in the region, eliminating terrorism and standing up to all separatist plans aimed at dividing the region.”