Mikdad: Syria’s achievements in war on terror reason of change in political atmospheres towards it 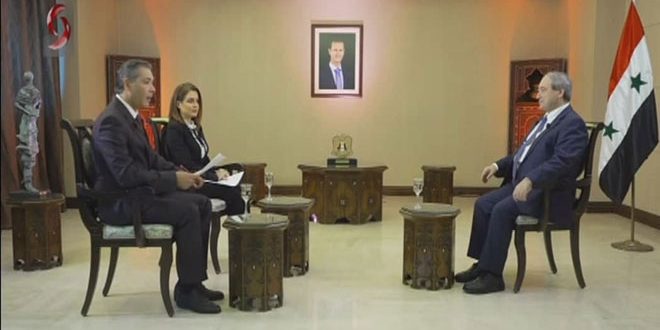 Damascus, SANA-Foreign and Expatriates Minister Faysal Mikdad said that the achievements Syria has obtained in the war on terrorism and sacrifices offered by its people to preserve their country’s sovereignty and territorial integrity  are the reason behind the change in the international political atmospheres towards the Syrian issue.

Mikdad added in an interview with Syrian and al-Ikhbariya TV channels on Thursday that the West has used economic blockade as a terrorist weapon against the Syrian people.

Foreign Minister hoped that the Pan-Arab work would be boosted to face the coming challenges, saying that Syria’s acceptance to transport the Egyptian gas to Lebanon came in light of its national stances towards the Lebanese brotherly people.

He stressed that war on terror will continue until it is fully eliminated, whether in Idleb or in al-Jazeera.

Mikdad went on to say that the main target behind aggression on Syria is to change the political situation, but Syria has foiled all plots been prepared against it.

He added that Syria will not abandon any part of its territory and the US, Turkish occupation forces should withdraw from Syrian lands.

As for chemical file, Mikdad affirmed that Syria voluntarily joined the Chemical Weapons convention in 2013 and fulfilled its obligations arising from its accession to the convention and destroyed all its stockpile.