Tens of gunmen and wanted persons have their files settled in Sanamayn city, Daraa countryside 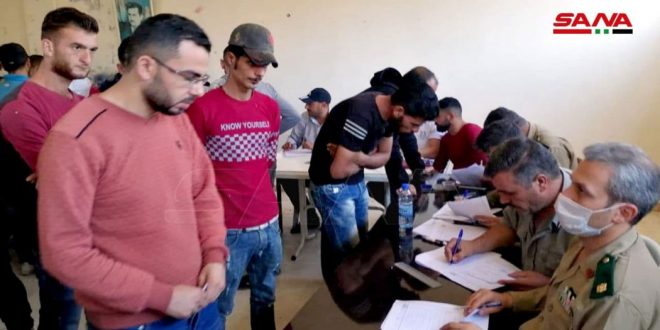 Daraa, SANA –The settlement operation of tens of gunmen, the wanted and military deserters began on Wednesday to settle their legal status and to hand over their weapons to Syrian Arab Army in Sanamayn city, in Daraa northern countryside in the framework of continuing the implementation of settlement agreement proposed by the State. SANA reporter said that scores of gunmen, the wanted and military deserters from Sanamayn city and the villages affiliated to it flocked into the settlement center that was opened on Thursday in Sanamayn city to have their files settled, and hand over their weapons to Syrian Arab army in implementation of the settlement agreement proposed by the State.

Daraa province witnessed during the past days similar settling operations starting from Daraa al-Balad neighborhood in the city , al Yadoudah village and Mzairib town, then in Tafas city and Tal Shahab town and the villages and towns in al-Yarmouk Basin in the northwestern countryside and in Nawa and Jasem cities and their vicinities, in parallel with the redeployment of units of the Syrian Arab Army to maintain security and stability to the area and the return of normal life.