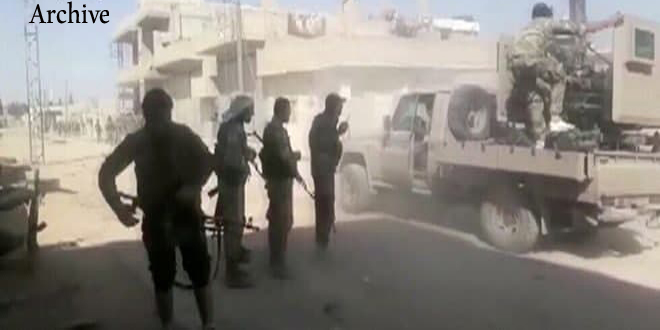 Aleppo, SANA – Turkish occupation’s mercenaries of terrorist organizations have continued their criminal practices against the civilians in the areas they occupy, as they seized one of the locals’ houses in Kafr Jannah village in Afrin area, Aleppo northern countryside and prevented farmers from going to their agricultural fields.

Local sources told SANA that militants of the so-called “Sultan Murad” which is loyal to the Turkish occupation forces have seized, by force of weapons a house in Kafr Jannah village, in Afrin area, Aleppo northern countryside, and assaulted and insulted its residents after taking off the house’s doors and breaking its contents and turning it into a military position.

In a relevant context, the sources noted that terrorists of the so-called “al-Sham Legion” have prevented the locals of Barad village in Afrin area from heading for their lands to harvest their agricultural crops and they have imposed harsh conditions in order to pay money to the terrorists with the aim of tightening the noose on them and forcing them to leave their lands.

The sources signaled that the terrorist organizations try, through their practices, to impose a fait accompli and bring about demographic change in the region within the framework of their Turkish operator’s schemes, which seeks to impose the Turkification policy on it.

It is noteworthy that the Turkish occupation and its mercenaries have previously seized, by force of weapon scores of houses and agricultural lands in the countryside of Aleppo and Hasaka, and they have displaced their owners, and later the Turkish regime authorities transferred tens of the mercenaries’ families from several areas and made them reside in these houses.