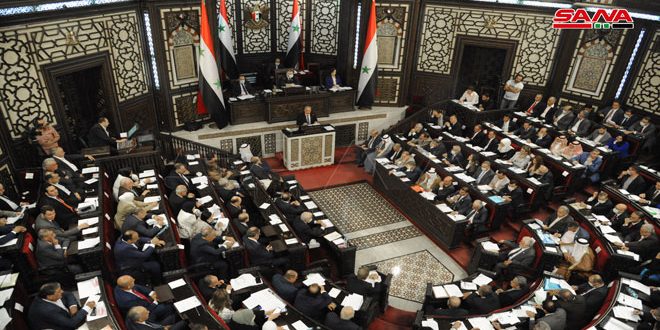 Damascus, SANA- People’s  Assembly held a session on Monday headed by Speaker Hammouda Sabbagh  in the presence of the Prime Minister, Hussein Arnous, and the ministers to discuss  the ministerial statement of the government including its work program for the next period. Sabbagh affirmed that the title of the current stage is the challenge of living and the  revival of the economy and this priority has two goals; the first is improving the livelihood conditions of the people through significant economic solutions and measures, and the second is confronting the war of starvation and blockade , which the enemies believed would succeed in subjugating the Syrian people after terrorism and occupation had failed to do so.

Prime Minister Arnous stressed that the Ministerial statement aims to define the general strategies that the government will follow to implement its tasks and responsibilities, and it is based on specific executive programs with a schedule and actual procedures for a period of three years and indicators that measure the volume of achievement.

Arnous affirmed commitment to the principles of serving the people, preserving state resources, maintaining  citizens’ rights, security, dignity and personal freedom, achieving justice, integrity and transparency, combating corruption, protecting cultural diversity with all its elements , and moving to a productive economy based on self-capacity. As for monetary policy, Arnous added the government will focus on the work of monetary policy tools to suit the current stage according to the data of economic condition in a way that could reduce exchange price and maintain the purchasing power of the SYP and prevent speculation in addition to boost e-paying.

Prime Minister said that the work program of the government included finding an appropriate environment to make positive and remarkable change in media and press sector to become as a bridge between the citizen and government.