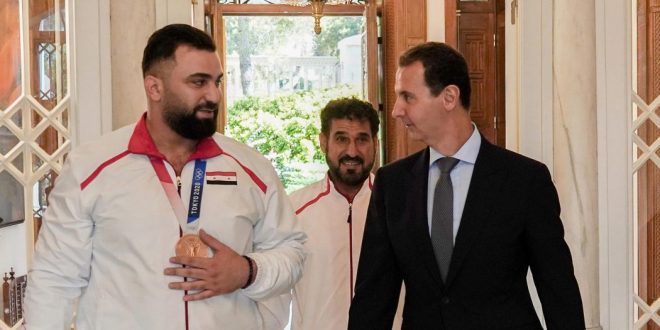 Damascus, SANA- In appreciation of his achievements in Tokyo Olympics and winning a bronze medal in Weightlifting, President Bashar al-Assad received on Thursday weightlifter Ma’an Asaad, his coach Qais Asaad and Head of the Weightlifting Federation Hassanin al-Sheikh. President al-Assad congratulated the team on that achievement and wished Syrian players more success in the upcoming sports competitions.

President al-Assad noted that although the rest athletes participating in the Syrian delegation to Tokyo Olympics, could not win medals, but reaching the Olympics and their participation in itself was an honor for them and for all Syrians, especially in the conditions of war, siege, and the poor potentials.

The President pointed out that this participation constitutes a rich experience since it allowed them to interact and compete with other athletes from all over the world.

President al-Assad stressed that winner Ma’an Asaad and other young men and women, who are full of challenge and determination to realize further achievements in all fields, represent Syria’s hope and the solid basis for building a better future for the homeland.