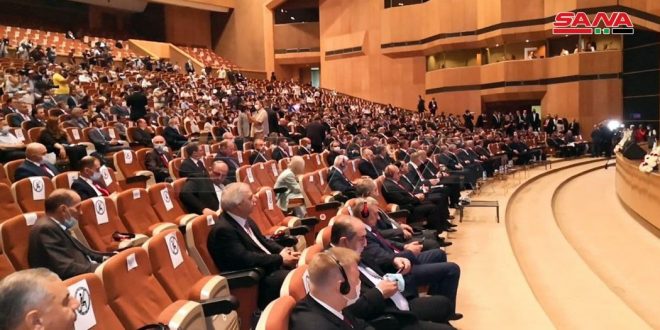 Damascus, SANA- With the participation of a large Russian delegation, the Syrian-Russian joint meeting to follow up the work of the International Conference on the Return of Syrian Refugees and Displaced, who were forced by the crimes of terrorists to leave their country, started activities on Monday at the Damascus-based Conferences Palace.

Head of the Syrian-Russian Ministerial Coordination Body, Caretaker Minister of Local Administration and Environment, Eng. Hussein Makhlouf, in a speech during the opening session of the meeting, said that the meeting comes to follow up on the outcomes of the International Conference on Return of refugees which was held at the end of last year. He pointed out to the significant improvement in the security situation, which has contributed to the return of five million displaced people until now, and 2.5 million refugees from inside and outside Syria since the establishment of the two Syrian-Russian coordination bodies.

For his part, Head of the Joint Ministerial Coordination Body in the Russian Federation and Head of the National Defense Management Center, General Mikhail Mezentsev, said in a similar speech, that the returning Syrians receive medical care, food aid and other things, and the families are also transported to their chosen places of residence in the shortest possible time, and job and education opportunities are secured.

Mezentsev stressed the continuation of joint work through the two joint Syrian-Russian ministerial coordination bodies, which ensures the implementation of a full set of measures for the return of the displaced and the restoration of a safe life in the country. He pointed to the repair of 987 educational institutions, 255 medical institutions, 4,966 residential buildings and more than 14.4 thousand industrial establishments, as well as bridges, highways, power lines, and the operation of hundreds of water facilities and bread facilities.

He stressed the need to enhance the efforts of the entire international community to provide humanitarian aid to the Syrian people and to assist the government in creating suitable conditions for the return of the Syrians to their areas, warning that the restrictive Western measures imposed on Syria impede the reconstruction of the country, and that the illegitimate presence of foreign forces on Syrian lands prevents the stability of the situations in the areas where they are deployed.

For his part, Assistant Foreign and Expatriates Minister in the caretaker government, Ayman Sousan, affirmed in a similar speech that tens of thousands of internally displaced persons have returned to their homes in their cities and villages, and that thousands have returned from outside Syria since the International Conference on Return of refugees was held in November 2020 in Damascus as a result of the measures taken by the state in various fields to facilitate their return, on top of which are the decrees of amnesty, settling the statuses and the national reconciliations, which have led to the release of an additional number of prisoners who had been misled. He indicated that the Syrian government, under the directives of President Bashar al-Assad, will continue to take all the needed measures to secure and facilitate the return of the displaced and secure the requirements of a decent life for them.

Sousan pointed out that the continuation of some hostile countries to impede the return of the displaced Syrians and to exploit their suffering to serve their hostile agendas constitutes a flagrant violation of international humanitarian law and the International human rights law, and they will not succeed in implementing their schemes and they will fail again thanks to the strong will of the Syrians and their determination to preserve their country.

Sousan noted that the brutal American and Turkish occupation of precious parts of the homeland, the illegitimate unilateral coercive measures, and attempts to prevent the reconstruction process constitute a continuation of the policies of the enemies of Syria to obstruct the return of refugees.

For his part, Foreign and expatriates caretaker Minister, Faysal Mikdad, said that the refugees’ return issue is still subjected to politicization and pressure which is practiced on states concerned to obstruct the return of refugees who have the will to return home and they are the majority. “The latest manifestations of politicization is the convening of the so-called /Brussels 5th conference to support future of Syria and the region/ during last March without the participation of Syria that aims to exert pressure on Syria through using the issue of refugees as a political card,” Mikdad said.

He added that the government continues its task, within the available potentials to facilitate and support the return of its citizens to their homeland and prepare suitable livelihood conditions in cooperation with friendly countries of Russia, Iran and China in addition to the UN and other international originations, referring to the catastrophic impacts of the unilateral coercive measures imposed on Syria, and the US, Turkey and Israel occupation of Syrian territories.ُ

Russian president’s special envoy for Syria, Alexander Lavrentiev, reaffirmed that the priority today is to return Syria to normal life, rebuild the economy and create appropriate conditions for the return of refugees and the displaced to their permanent place of residence, noting that the number of those wishing to return to their homes is large. Lavrentiev referred to the destructive effect of the illegitimate unilateral measures imposed on Syria and the need to put an end to the collective punishment of the Syrian people just because they stand with their country, calling on all members of the international community to take specific and effective steps to solve the problem of Syrian refugees.

Sarah: Sanctions and blockade are main obstacles facing the return of refugees

Caretaker Minister of Information, Imad Sarah, affirmed that the Syrian government does its best for the return of Syrian refugees and displaced as this issue forms a priority, but sanctions and economic blockade imposed by western states against Syria hinder this process. “The Syrian State gives a special importance for the return of the displaced,” Sarah said in a press statement on the sidelines of the conference.

He added that the State secures the appropriate environment and services for their return, including health and economic sectors. 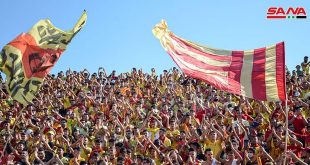