Foreign Ministry: Statements of US officials about Syria “detached from Reality” 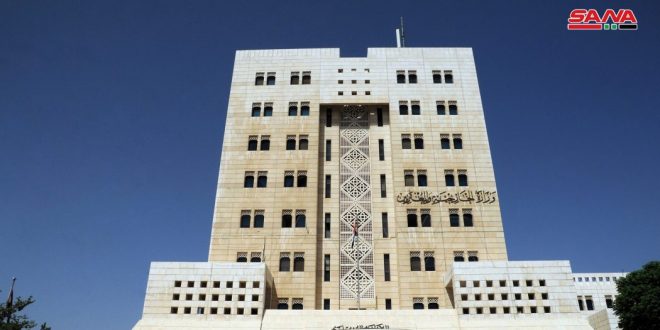 Damascus, SANA- Foreign and Expatriates Ministry described as “detached from reality” the statements of some US officials which came shortly after their illegitimate entry to regions in the south-eastern parts of Syria, adding that the way through which those officials have entered the country is a form of thievery which aims to undermine Syria’s sovereignty and support the armed separatist militias.

“The statements of US officials, which are ditched from reality,  ignored the fact that  the Syrian people’s participation all over the homeland and abroad at the embassies of the Syrian Arab Republic with full freedom, awareness and belonging to the homeland in voting to the presidential elections is nothing but a form of raising the voice loudly in the face of Western officials who were not satisfied with this participation,” the Ministry said in a statement on Monday.

It stressed that only the Syrians would legitimize the presidential election, and not the statements of some Western officials that are full of fallacies and lies and those who claim democracy while practicing the contrary and their countries occupy the lands of others and steal their national resources and capabilities.

The ministry added that the US continued support for terrorism and the use of terrorists and armed separatist militias to achieve their goals and loot the Syrian resources of oil and wheat stresses the falsity of the allegations marketed by Washington and other affiliated countries about the protection of civilians at armed conflicts, the rights of refugees and respect for international humanitarian law.