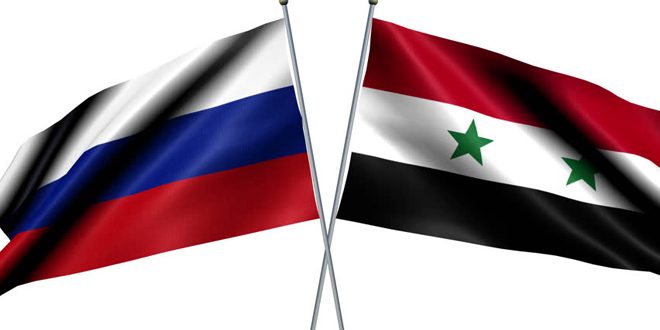 Damascus, SANA- The Syrian and Russian Coordination Commissions for the Return of the Displaced Syrians have affirmed that Syria and Russia continue to work with the aim of providing various assistance to secure the voluntary and safe return of the displaced to the homeland and to create the appropriate conditions for this return, despite the obstacles that the American side is still creating to prevent this.

“The return of the displaced Syrians to their original homeland remains a priority for the Syrian state, which is making the utmost efforts to rebuild infrastructure and public facilities and create job opportunities to secure the return of Syrians to their liberated areas,” the two commissions added in a joint statement.

The statement noted that the “illegal economic sanctions, and the failure of the United States of America and its allies to respect the sovereignty of Syria and its occupation of parts of Syria’s lands impede the efforts of the Syrian state to advance the process of returning refugees.”

The statement added that “representatives of international humanitarian organizations in Syria have called more than once to mitigate the sanctions policy imposed by the United States on Syrian citizens, which impede the arrival of foodstuffs and medicines, including the necessary ones that must be available to confront the outbreak of the Coronavirus pandemic among the Syrian citizens.”

“Regardless of the claims of the American side that it stands by the general humanitarian values, all calls for the relief of inhuman sanctions are still absent because the interests of the United States of America in Syria are limited to plundering national wealth, which drives it to continue preventing the return of Syrian citizens and the reconstruction in the post-war phase, and it spreads false propaganda in the areas under its control aimed at preventing Syrian citizens from returning to their country,” the statement read.

The statement noted that “the territories occupied by the US forces in al-Tanf area on the Syrian-Jordanian borders and in the Syrian al-Jazeera region are witnessing violations of all basic human rights norms and the neglect of the needs of the civilian population living in the camps of the displaced, as the situation of the Syrian citizens in al-Rukban and al-Houl camps approaches the humanitarian catastrophe and worsens due to the Coronavirus pandemic and economic sanctions.”

“These factors lead to an increase in tension among the residents of al-Houl camp and push them towards more militancy, which reveals concretely that the United States of America is working in various ways to achieve geopolitical goals that have absolutely nothing to do with restoring peaceful life to Syria and the Middle East in general,” the statement said.

The two commissions concluded their statement by renewing the demand that the United States of America “stop destabilizing the social and economic situation in the Syrian Arab Republic and immediately exit from the lands it occupies in Syria illegitimately and cancel the unilateral coercive measures imposed on the Syrian people.” 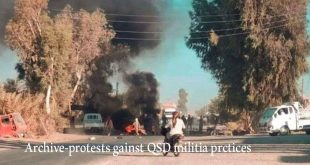 Deir Ezzor, SANA- A woman and a man were injured by fire of the US-backed …