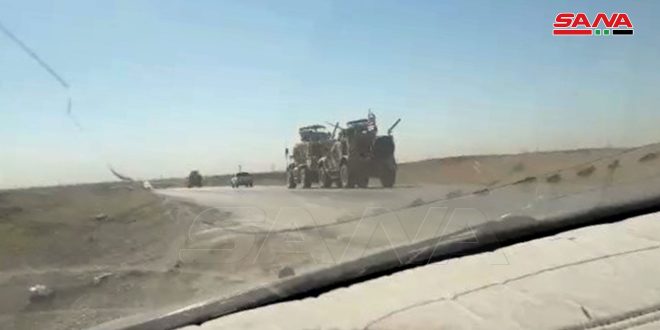 Hasaka, SANA- US occupation forces have brought out a convoy of military vehicles and trucks, some of them laden with wheat stolen from the Syrian lands to northern Iraq via al-Walid illegal border crossing in Hasaka countryside.

Local sources told SANA that US occupation forces continue stealing the Syrian wealth and the agricultural crops from the lands which they occupied in the Syrian al-Jazeera region as a convoy of 27 military vehicles, including Hummer cars and armored vehicles, trucks laden with wheat and stolen oil tankers form the Syrian oil fields.

Meanwhile, local sources from Tal Hamis said that a convoy of nine vehicles of the US occupation forces, arrived at al-Hol area, including four carriers loaded with four large-sized missiles, and a number of armored vehicles of various types.