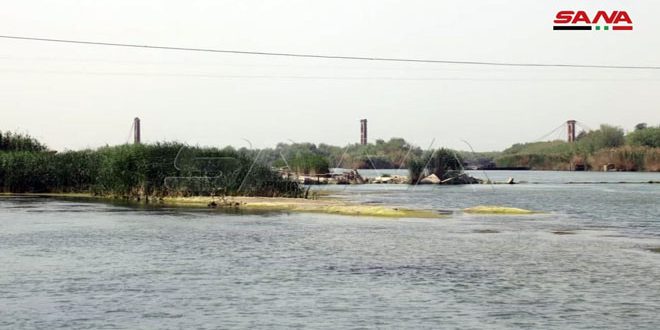 Hasaka, SANA- For the seventh day in a row, electricity power outage continued in Hasaka province due to Turkish regime control of the quantities of water supplying the Euphrates Dam and stealing Syria’s share of the water of the River which caused to stop the electric power generation turbines in the dam.

Eng. Anwar Okla., Director of General Electricity Company in Hasaka, said in a statement to SANA that the lack of water access caused the 230-high voltage line, connecting al-Tabqah and al-Bawab stations, to go out of service.

The line is considered as main source for feeding neighborhoods of cities and areas in the province, al-Okla added.

He noted that the company uses the quantities produced in al-Sweidyia generation facility, which are between 40 to 50 mega per a day. These quantities are devoted to hospitals, bakeries, mills, communication and water aiming to guarantee providing services.

He pointed out that the improvement of electricity situation in the province is linked with the improvement of water supply to the Dam, which requires releasing the water of the Euphrates river and stopping Turkish regime violations by all possible means.