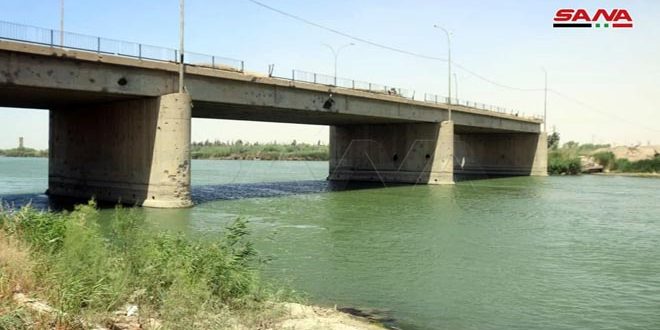 Deir Ezzor, Raqqa, SANA-The Euphrates River witnessed a significant drop in the water level during the last few days as a result of the Turkish regime seizing of large quantities of river water, preventing it from flowing towards Syria, which affected the living and agricultural situation in the countryside of Raqqa and Deir Ezzor.

Governor of Raqqa, Abdul Razzaq Khalifa said in a statement to SANA that the Turkish side has reduced the water supply of the Euphrates River to Syria from 500 to 200 cubic meters per second, which prevented the operation of the turbines from generating electricity produced in the Euphrates Dam, in addition to reducing irrigation and drinking water.

An agreement signed with Turkey in 1987 stipulates that the water supply in the Euphrates River from Turkey to Syria should not be less than 500 cubic meters per second to operate the electricity turbines in the Euphrates Dam.

For his part, head of the Peasants’ Union in Deir Ezzor, Khazan al-Sahou, warned of dangers of the low in the river level , pointing out that the water level low threatens agricultural crops, particularly the strategic wheat crop, which is cultivated in area about 30 thousand hectares.

The hostile step of the Turkish regime comes in the framework of its continued attacks on the Syrians, as its terrorists positioned in many villages and towns near the borders loot the property and agricultural crops of the people.