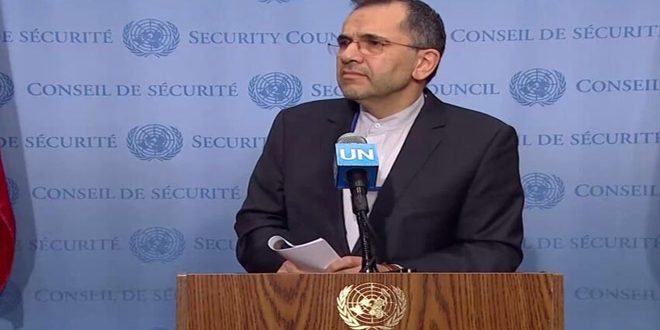 Tehran, SANA- Iran’s Permanent Representative to UN, Ambassador Majid Takht Ravanchi slammed the silence of UN Security Council towards the suffering of Syrian people which is due to the Western unilateral coercive measures imposed on them.

In his speech, during a UN Security Council meeting on “Protection of civilians in armed conflicts”, Ravanchi said that the repercussion of these unilateral inhuman measures against Syria seriously affect the lives of people as they prevent importing humanitarian goods, including food and medicines.

The Iranian diplomat underlined the necessity of stopping such measures.

He pointed out to the inhuman and illegal behaviors of Zionist entity in the occupied Palestinian territories during the past decades which include arbitrary practices, mainly the widespread ethnic cleansing, demolishing houses, seizing the Palestinians’ properties, the illegitimate siege imposed on Gaza Strip and the massacres against the civilians, including innocent children and women, as they are considered clear examples of the Israeli war crimes.